With the priority on style, the Volkswagen Arteon isn’t as economical as some VWs

The Volkswagen Arteon offers a choice of two petrol and three diesel options, but other versions have joined and left the line-up. It shares a chassis with other hatchback and saloon models in the VW Group portfolio, so even more engines could find their way under the bonnet, and a plug-in hybrid version can’t be ruled out, either. 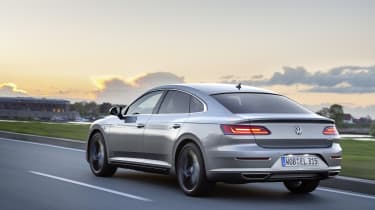 The 2.0-litre, four-cylinder 148bhp turbocharged diesel is amongst the most frugal engines, for company-car owners and private buyers alike. The diesel’s claimed fuel consumption is around 50mpg, and it emits 136g/km of CO2 for a middling Benefit-in-Kind bracket for company-car tax.

Those who cover a lower annual mileage may be better off choosing the 187bhp, 2.0-litre petrol. It returns up to 38.2mpg, is cheaper to buy in the first place, but emits around 170g/km of CO2, putting it in the top BiK band for company-car drivers. Those who want more power have the choice of the 276bhp petrol, which returns up to 35mpg with CO2 emissions of 193g/km, or the 237bhp Bi-TDI diesel, which is good for 39.2mpg and emissions of 200g/km in CO2.

Every Arteon will cost at least £150 a year in annual road tax, but it’ll be easy to send the asking price beyond £40,000 with optional extras. That’s the threshold at which the car becomes subject to an additional £325 yearly payment during years two to six of ownership.

The most powerful Arteon models fall into group 32 and insurance companies put the 2.0-litre petrol and diesel variants in groups 22-28.

Arteon drivers can expect enjoyably long periods between scheduled maintenance appointments. Customers can choose from two types of servicing – Fixed or Flexible – with Fixed best suited to low-mileage drivers who make frequent short journeys with lots of cold starts. Here the intervals are every 12 months or 12,000 miles, whichever comes first.

Long-distance drivers who typically drive more than 25 miles a day can opt for Flexible servicing, with the first service arriving after a maximum of two years and 20,000 miles. However, sensors in the car can suggest a service sooner, depending on how the car is driven.

Low maintenance costs are one of the strongest draws of the Arteon and are likely to increase its appeal to corporate users and private buyers alike.

The Volkswagen Arteon is covered by the same three-year/60,000-mile warranty as offered elsewhere in the VW Group, with extended warranty options also available for extra cost. This warranty is overshadowed by those from Mercedes and BMW, which place no upper mileage limit in the third year (VW places no mileage limit on the first two years only). It's also considerably less generous than those offered by more affordable brands such as Toyota, Hyundai and Kia, the latter of which provides a seven-year/100,000-mile warranty on every new car it sells in the UK.