The VW Golf Cabriolet is just about roomy enough for four adults, while the modest-sized boot can be enlarged thanks to rear seats that fold down flat

Despite its fun-loving character, the Volkswagen Golf Cabriolet doesn’t demand much in the way of compromise. The roof opens or closes in just 9.5 seconds and at speeds of up to 19mph, so you can take advantage of the sun the moment it shines. The model is just about roomy enough for four adults, while the modest-sized boot can be enlarged thanks to rear seats that fold down flat. Although this is first and foremost a car for leisure trips, it’s not shy of a bit of hard work, with more than respectable towing limits depending on the model. 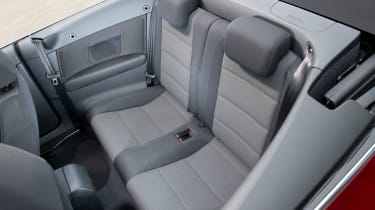 There’s plenty of room for two adults in the front of the Golf Cabriolet. However, it’s a two-door, so getting into the back is a bit of a squeeze. Once installed, two adults can sit in reasonable comfort. Unfortunately, taller ones may suffer some wind buffeting, despite a wind deflector being fitted as standard on SE models and above (it’s an option on the S model). Large door pockets, a couple of cup-holders and a decent-sized glovebox are your storage options.

One useful trick the Cabriolet has up its sleeve is the fact that the hood folds onto the top of the car rather than into the boot. As a result, the car keeps its 250-litre boot space whether the roof is up or down, so it can accommodate a week’s shopping with ease. 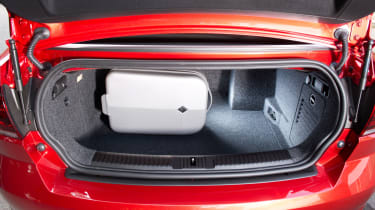 For the record, boot space in the BMW 2 Series cabriolet is 280 litres. Of course, the Golf hatchback’s boot is larger than both, at 380 litres, while its opening is considerably bigger, but if you really needed that luggage space and easier access, you wouldn’t be buying a convertible. In any case, the Golf Cabriolet’s rear seats split 50:50, allowing you to fold one or both of them flat should a larger load require you to.

Depending on the model, the Golf Cabriolet can tow from 1,200kg (1.2-litre TSI) to 1,500kg (2.0-litre TDI). Even the 1.4-litre TSI can manage 1,400kg – the same as the 2.0-litre GTI. Usually, we’d say diesels make better tow cars, but the turbocharger and supercharger technology in the Golf Cabriolet’s petrol engines provides a good slug of power right where you need it, helping make light work of low-speed towing.