For the lowest Volkswagen Golf Cabriolet running costs, the 1.6-litre TDI BlueMotion is the model to go for

The small-capacity petrol engines offered in the Volkswagen Golf Cabriolet are not only powerful, but also economical and cheap to tax. That said, the two diesel engines are more efficient still, which makes them the top choice if you’re a high-mileage driver.

A desirable image means cabriolets are never the cheapest cars to insure. The Golf Cabriolet is no exception. Fortunately, servicing need not cost a fortune, while the warranty lasts for a reassuring three years or 60,000 miles.

If you're after the lowest running costs on your Golf cabriolet, then it's a diesel you should go for. The most efficient is the 148bhp 2.0-litre unit with the manual gearbox. This will manage 65.7mpg and emits 112g/km of CO2, reulting in a £30 annual tax bill. The 108bhp version will cost the same to tax, but is actually slightly less efficient, managing just 62.8mpg. If you'd fancy an automatic gearbox, then you'll have to go for the 148bhp version. Be warned, however, as this drops fuel economy to 60.1mpg and ups your tax bill to £110 a year. 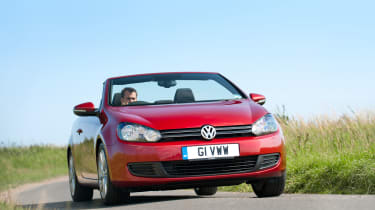 The cleanest petrol model is the basic 1.2-litre TSI. It returns an impressive (for a petrol) 54.3mpg fuel economy, though it costs £110 a year to tax. It’s only available in basic S trim, however. The 123bhp 1.4-litre TSI (which is available in plush SE spec as well as S form) returns 51.4mpg, costs £110 to tax and is the better buy. In fact, the automatic version is slightly greener, although more expensive.

There’s also a more powerful 148bhp 1.4-litre TSI engine whose fuel consumption and emissions figures are identical to the less powerful version, but since it’s only a little cheaper than the much more efficient 2.0-litre TDI BlueMotion GT diesel, we’d avoid it.

The letters G and T have a significant effect on VW Golf Cabriolet insurance premiums. All GT versions sit in group 31, along with the much more powerful GTI. At the other extreme, S versions are in group 15 while the SE falls into group 18.

VW’s three-year/60,000-mile warranty is not as impressive as BMW’s, which is limited to 100,000 miles, but it should be sufficient for most Cabriolet buyers. After all, anyone planning to do more than 60,000 miles would be advised to choose something with a solid roof, improved cruising ability and better all-weather refinement. If you’re planning to keep your Cabriolet for longer than three years, you can buy a fourth year of warranty cover for around £400. However, a fifth year costs a lot more – around £900.

Volkswagen service rates are more expensive than Ford’s, but cheaper than Audi’s. It’s possible to spread the cost of routine maintenance by purchasing a Service Plan, which can cover VW Golf Cabriolet servicing from around £16 per month or a very reasonable one-off payment of around £290.