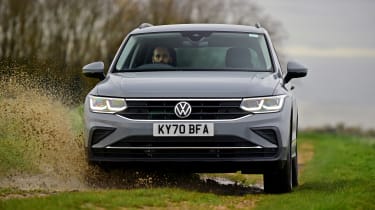 Volkswagen’s reputation for reliability has taken something of a dive in recent years, so it’ll be interesting to see if the new Tiguan helps to buck this trend.

The Volkswagen Tiguan featured in our 2020 Driver Power owner satisfaction survey, finishing 51st overall. Owners rated it for seat versatility and its big boot, while infotainment, connectivity and electrics all met with owners’ expectations, too. Reliability and build quality was rated as average, with 20.2% of owners reporting a fault within the first year, with electrical issues being most common.

The survey put the Tiguan behind some of its rivals in the reliability stakes, though – the Mazda CX-5, Kia Sportage, Honda CR-V and Lexus NX all fared considerably better. The Tiguan’s engine refinement and brakes were also rated lower than some rivals’ by owners.

The Tiguan received a five-star rating from Euro NCAP when it was crash-tested in 2016. It scored an impressive 96% in the adult occupant protection category, as well as 84% for child occupant protection. Standard equipment includes automatic emergency braking and lane-keeping assistance, together with the usual range of airbags and stability control systems.