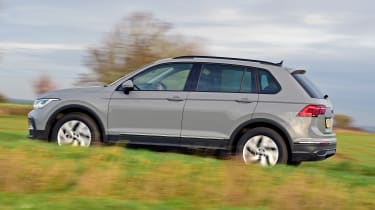 The Volkswagen Tiguan doesn't have class-leading economy figures, but they're reasonable for the compact SUV class and shouldn't be too hard to stomach. a Nissan Qashqai has smaller engines and – with its greater economy – it’ll be slightly cheaper to run than the Tiguan.

New 'twin-dosing' technology for the Tiguan's diesels helps reduce harmful emissions and the Tiguan eHybrid plug-in will be desirable for company-car drivers thanks to its ability to shrink Benefit-in-Kind (BiK) bills.

When equipped with front-wheel drive and the 148bhp version of the 2.0-litre diesel engine (a 197bhp version is also available), the Tiguan emits around 150g/km of CO2 and returns close to 50mpg. With four-wheel drive and a seven-speed automatic gearbox it returns up to 44.1mpg and emits around 170g/km of CO2. The 113bhp 1.6-litre diesel engine was discontinued in 2020.

The more powerful 197bhp diesel should manage similar figures, returning just over 42mpg with emissions of 172-181g/km placing it in the highest BiK band.

The 148bhp 1.5-litre petrol engine is only available in front-wheel drive and returns up to 42.8mpg with CO2 emissions from 146g/km. This engine sits towards the higher end of BiK tax bandings for company car drivers.

The plug-in hybrid Tiguan eHybrid will appeal to private and business buyers alike, thanks to its ability to drive for up to 31 miles using just electricity. It uses the same powertrain as the Golf GTE, with 242bhp from its petrol engine and electric motor.

Almost all Tiguans cost £150 a year to tax, but if you add enough options to a top-spec model to push its price above £40,000, you'll pay a £325 surcharge the first five times you tax the car, making for a total of £475 a year during that period. The eHybrid costs £140 a year thanks to its low CO2 emissions. 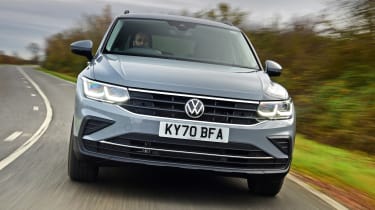 Insuring the Tiguan should be relatively affordable, as it sits in groups 11-27 out of 50; models in higher trim levels and with more powerful engines obviously inhabit the higher end of that range. By comparison, the Mazda CX-5 runs from groups 17 to 23, while the BMW X1 starts in group 25 and rises considerably as you head up through the range.

The Tiguan has the same three-year/60,000-mile warranty as other Volkswagens, with only the first two years having no cap on mileage. There’s the option of extending this for one or two years.

We think it’s a great shame, when companies like Hyundai and Kia can offer five and seven-year warranties respectively, that Volkswagen can’t reflect its reputation for reliability by offering a more generous standard warranty.

The Tiguan’s service requirements are similar to those of other models in the Volkswagen group. The recommendation is fixed-interval servicing: once a year or every 10,000 miles, whichever comes first.

This is essential if your car covers low mileage or short journeys where the engine doesn’t always have time to get up to its normal operating temperature. A service plan is available to cover fixed-interval servicing, with pricing available from your dealership.

Alternatively, for higher-mileage drivers, a variable interval scheme can be followed based on wear sensors in the car. This will suit you if you’re likely to exceed 10,000 miles a year and spend most of your time on motorways, driving at sustained speeds where the car doesn’t experience much in the way of fatiguing start-stop urban driving.

Following this regime, the service intervals can be anything between 10,000 and 20,000 miles – but never more than 24 months – between dealer visits.