The Touran is a smooth and easy car to drive – particularly with the optional seven-speed DSG automatic gearbox fitted – although it's far from the most exciting thing on four wheels. It's perhaps a little too noisy on the motorway, but deals with most urban and rural roads without fuss. A drop in weight compared to the previous-generation Touran has made this version a little lighter on its feet. 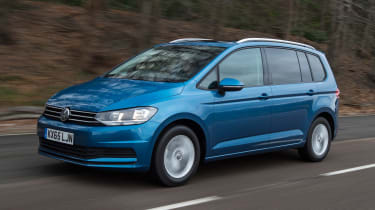 In the past, buyers of a car like this wouldn't have considered anything but diesel power. But recent emissions concerns and developments in turbocharging technology have seen the pendulum swing back towards petrol – especially for lower-mileage drivers.

Now, the only choice in the petrol range is the 1.5-litre TSI and it offers the choice of manual or automatic gearbox. It produces a healthy 148bhp, for a sprightly nine-second 0-62mph time, and is reasonably economical when paired with either gearbox. This engine also includes cylinder deactivation technology, so it can run on just two of its four cylinders when full power isn’t required. Previously, a 108bhp 1.2-litre engine was offered, while the 1.5-litre engine effectively replaced the old 1.4-litre. 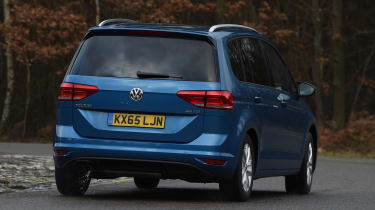 There's a choice of two diesel engines for the Touran – a pair of 2.0-litres. With the 1.6-litre no longer offered, the 2.0-litre engines (which make 114bhp and 148bhp respectively) are both powerful enough if you regularly travel with seven people or lots of luggage on board, although we’d recommend the larger engine if you intend to use your Touran for towing. The larger engine also reduces the 0-62mph time by two seconds.

Whichever diesel you go for, you can specify VW's DSG twin-clutch automatic gearbox – and we'd recommend that you do. It changes gear swiftly and smoothly, boosts efficiency and makes driving in stop-start city traffic much easier than with a manual.