Volkswagen says modern turbocharged engine technology, a reduction in weight and better aerodynamics compared to its predecessor are responsible for this VW Touran being 19% more efficient than previous models.

With conventional engines, the Touran isn’t efficient enough to escape road tax, with every version costing £150 each year. However, the most frugal model, the 148bhp 2.0-litre TDI with a manual gearbox, will return 52.3mpg fuel economy and emits just 122g/km of CO2 - the extra tax on diesel means it’s still quite expensive for company-car users. The most efficient petrol engine returns 41.5mpg and emits 122g/km, for the lowest Benefit-in-Kind (BiK) band in the Touran line-up.

As always, drivers who do relatively low annual mileage (less than 10,000 miles or so) will probably be better off financially with the petrol, as it can take quite a while to cancel out the diesel's higher purchase price with lower running costs. The petrol is also better suited to making frequent short trips around town, such as the school run or weekly shop.

For both the petrol and diesel, choosing the seven-speed DSG automatic gearbox rather than the regular six-speed manual doesn’t mean compromising on fuel economy, as is the case with some cars. 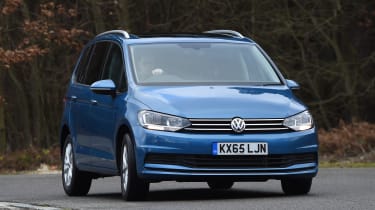 Cover for the Touran shouldn't be too expensive: the diesel models fall into groups 13 to 17, while the petrols occupy either 16 or 17.

Like all other VWs, the Touran has unlimited-mileage cover for the first two years of ownership, with a third year of cover offered as long as you haven't exceeded 60,000 miles. The warranty can also be extended at extra cost.

Volkswagen offers a range of service plans to make paying for the maintenance of your Touran as painless as possible. Fixed servicing means one is due every 12 months, while flexible servicing (aimed at higher mileage drivers) allows longer service intervals. Servicing plans are available, with a monthly payment or an up-front payment covering the first two services.