The Volkswagen up! is a well built car and occupant safety is a priority

The Volkswagen up! scored a five-star rating in its 2011 Euro NCAP test. Since then, Euro NCAP has made its tests more stringent and now places more emphasis on advanced safety systems, many of which aren’t available on the up!.

The Volkswagen up! is quite a simple car, so reliability should be good in theory. However, not enough results were returned for it to appear in the 100 cars ranked in our 2019 Driver Power owner satisfaction survey of cars currently on sale in the UK.

The Volkswagen brand itself achieved a score of 17th out of 30 manufacturers. Owners generally didn’t like the interior design or exterior styling of their Volkswagens, and weren’t fans of the ride and handling either. Of the owners who responded, 26.2% reported experiencing a problem with their car at least once, but the most common cause of these issues was electrical gremlins.

The up!’s three-year/60,000-mile warranty is hardly class-leading (the Hyundai i10’s five-year/unlimited-mileage policy is better), but the car is relatively uncomplicated and uses tried-and-tested Volkswagen parts, which bodes well for the frequency and cost of any repairs. 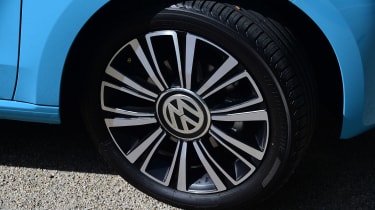 The Volkswagen up! scored a full five-star crash safety rating in its 2011 Euro NCAP test. Since then, Euro NCAP has updated its testing regime, and gave the up!, Citigo and Mii a disappointing three-star score when they were retested in late 2019. A lack of now-essential safety kit like autonomous emergency braking and lane-keeping assist means the up! can’t match the four-star scores of rivals.

Naturally the up! still comes with mandatory equipment like electronic stability control, anti-lock brakes and a seatbelt reminder buzzer, as well as six airbags.