The Volvo S60 can't match its V60 estate sister for sheer versatility, but it’s certainly competitive where it comes to passenger comfort. Some rivals offer more boot space but the plug-in hybrid versions of the S60 offer no less boot space than the petrol models.

The Volvo S60 is slightly longer than its BMW 3 Series and Mercedes C-Class rivals but its extra length doesn't really bring any drawbacks. It doesn't feel particularly cumbersome on urban streets, and is relatively easy to manoeuvre, especially if you have the optional self-parking pack. 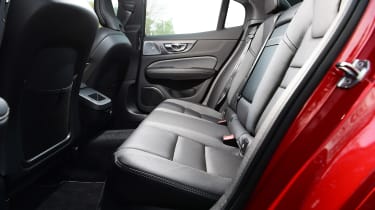 The front seats are extremely supportive and offer enough adjustment to make it easy for most drivers to find a decent seating position, and the front passenger has plenty of room in which to stretch out. A curvaceous roofline means the S60 isn't quite as generous on headroom as the square-backed V60, particularly for those in the rear seats, but you'll need to be well over six feet tall before you begin to brush your head on the ceiling. If you are tall, it's worth avoiding the panoramic sunroof, which reduces headroom slightly.

Rear seat legroom, meanwhile, is at least a match for the Audi A4, but the middle rear passenger may find the central 'tunnel' a little intrusive – it's quite bulky and leaves little space for feet. 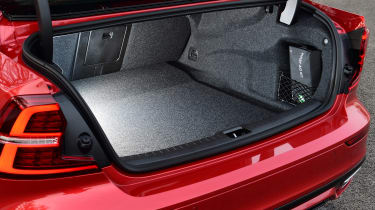 Unlike conventional four-wheel drive cars that have a propeller shaft to transmit engine power to the rear wheels, the T8 TwinEngine uses an electric motor. With no propshaft to fill the tunnel that runs through the passenger compartment, the space freed up has been used for the plug-in hybrid's lithium-ion battery pack, which means it doesn't impinge on luggage space.

The result is 442 litres of space in the boot, which is a lower figure than the 480 litres boasted by the Audi A4 and Mercedes C-Class. It drops further for cars equipped with a spare wheel in place of a puncture repair kit, with only 390 litres available. This figure only just beats the 375 litres of the BMW 330e plug-in hybrid.