The RS3 should prove both safe and reliable

Audi’s strong reputation for quality doesn’t necessarily translate into owner satisfaction – the brand finished below Skoda in an overall 21st position in our 2020 Driver Power survey. However, this still put it ahead of rivals BMW in 27th and Mercedes in 28th place out of 30 manufacturers.

The 2.5-litre engine in the RS3 has been used in Audis before, albeit in a less powerful form, so we expect it to be reliable. While the RS3 didn’t feature individually, the wider Audi A3 range was rated average for reliability in our 2019 Driver Power survey. Of the owners who responded, 16% reported experiencing a problem with their car at least once.

Owners regard the engine and gearbox, along with the ride and handling of their A3 among its strongest attributes. They're not so impressed with its running costs and fuel economy – the latter not being the RS3's strong suit. 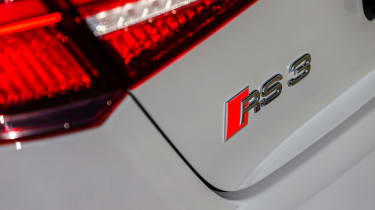 The RS3 itself won’t be crash-tested by Euro NCAP as it’s not sold in large enough numbers, but the standard A3 scored a full five-star rating when it was put through its paces.

While the standard safety roster includes the usual airbags, stability control and other mandatory features, autonomous emergency braking only appears if you order the optional Driver Assistance Pack. This also includes active cruise control, high-beam assist, road-sign recognition and traffic-jam assistance, which can semi-autonomously drive in congested traffic at up to 37mph.