Unsurprisingly, diesel engines dominate the Audi A4 Allroad range. Only one petrol is available and it’s by far the costliest to run. The diesels will be cheaper to run (both in terms of how much fuel they’ll use and depreciation) than the petrol. The diesels’ secondhand value is boosted by their suitability and popularity as tow cars.

In general, however, all versions of the A4 Allroad use more fuel and cost more to tax than the equivalent A4 Avant, due to the extra weight of the four-wheel-drive system, its extra complexity and the poorer aerodynamics that come with a higher ride height.

If running costs are your priority, then it might be worth waiting a little while before ordering your Audi A4 Allroad. At the moment, the only version of the car with the fuel-saving ‘quattro with Ultra technology’ is the 247bhp turbo petrol. The reason you should wait is that the 2.0-litre diesel versions will be getting this system before long, which should improve their fuel economy and CO2 emissions hugely. A cleaner, more efficient 148bhp diesel is also on the way. 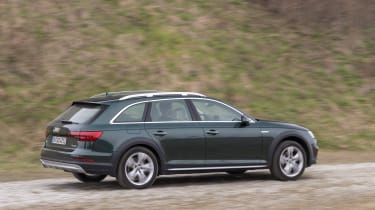 Right now, however, the cheapest model in the range to run is the 187bhp 2.0-litre diesel. This will return around 57.6mpg on average, while CO2 emissions are rated at 129g/km with the seven-speed dual-clutch automatic gearbox. This means you’ll be liable for a £110 annual road-tax bill and company car buyers will have to bear a 25% Benefit-in-Kind (BiK) tax contribution.

Also available at launch are two 3.0-litre V6 diesels, producing 215 and 268bhp respectively. The less powerful version manages 55.4mpg and emits 137g/km of CO2. This means you’ll be liable for a £130 annual road-tax bill and equates to a 27% BiK rating. On the other hand, the more powerful V6 diesel returns around 53mpg on average, which means a £130 road-tax bill, thanks to CO2 emissions of 139g/km. This means a 27% BiK liability, too.

There’s only one petrol model available so far and it’s one not many people are likely to go for. Officially, it averages 44.1mpg and has CO2 emissions of 147g/km, resulting in a £145 annual tax bill. These numbers would be worse were it not for the fact that this is the first engine in the A4 Allroad range to come with the fuel-saving ‘quattro with Ultra technology’ part-time four-wheel-drive setup. This will be available across the range in due course.

The A4 Allroad needs to be serviced every 12 months or 9,000 miles – whichever comes first. There are two types of service, which alternate every other year. The first is a minor service, which costs from £159 and includes an engine oil and filter change, while the more in-depth ‘inspection’ service costs from £309 and includes, among other things, an air filter change.

Audi’s three-year/60,000-mile warranty is roughly on par with the rest of this class and standard across the Volkswagen Group. Mercedes and BMW also offer three-year warranties as standard, but they don’t impose a mileage limit, which is a black mark against the Audi.