The Audi A4 Allroad is just as practical as the standard Avant, and that’s very practical indeed.

In the conversion from Avant to Allroad, the A4’s practicality hasn’t been affected at all. There’s still plenty of space in the boot and the slightly higher ride height actually makes the car a tiny bit easier to get in and out of, thanks to the higher-set seats. The other dimensions haven’t changed, meaning the Allroad is still a pretty large car – bigger than the BMW 3 Series Touring, VW Passat Alltrack or Mercedes C-Class Estate. It’s not quite as big or as spacious as a Skoda Superb Estate, but if we’re honest, very little is.

In this respect, the Allroad is just about identical to the standard A4 Avant. There’s plenty of space in both the front and back seats, with the rear capable of swallowing either three children or two adults in comfort (the transmission tunnel restricts the middle rear seat’s use for adults). 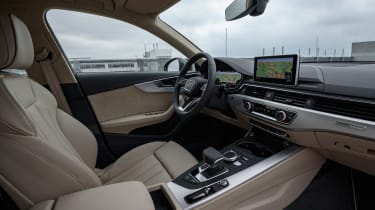 The steering wheel adjusts for both reach and rake, while the driver’s seat can be adjusted in just about every possible way, meaning you’re always able to find the best driving position. All the seats are brilliantly comfortable, too, letting you soak up long journeys with ease.

Two ISOFIX child-seat mounting points in the back mean you can carry young children without any qualms, while there’s one on the front passenger seat, too. All the doors open plenty wide enough, too, so getting people or things in and out – especially of the rear seats – is easy.

There are a decent number of storage bins dotted around the interior, with well sized door pockets, a deep cubbyhole under the centre armrest, two cup-holders in the front and a glovebox that can easily hold a large bottle of water. 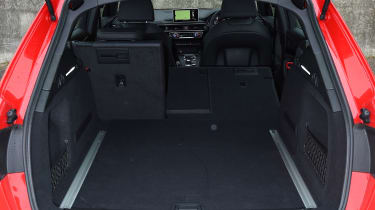 The Allroad version of the Audi A4 fares just as well in this regard as the Audio A4 Avant. With the rear seats up, you get 505 litres of space, increasing to 1,510 litres with them folded flat. Both figures are more than you’ll find in a BMW 3 Series Touring, Volvo V60 Cross Country or Mercedes C-Class Estate, but lag a fair way behind the gargantuan load bays of the Volkswagen Passat Alltrack and four-wheel-drive Skoda Superb Estate.

It’s unlikely, however, that you’ll ever be left wanting for boot space. The load area itself has a very usable, square shape, which, combined with a non-existent load lip, makes it exceptionally easy to slide heavy items in and out of.

The rear seats fold nearly (but not quite) flat, which is slightly disappointing, but fairly standard in this class. One handy feature is the strip of LED lights on either side of the boot, which help to illuminate it at night.