Audi’s 21st-place overall finish (out of 30 manufacturers) in our 2020 Driver Power owner satisfaction survey is slightly concerning, but that’s still above main rivals BMW and Mercedes. 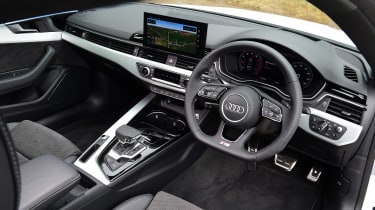 Although the A5 was a completely new car, many of the mechanical parts – such as the engines and quattro four-wheel-drive system – have been around for a while and so are well proven. However, we’ve heard of some issues with the Virtual Cockpit digital instrument cluster, which fit into the ‘annoying’ rather than ‘catastrophic’ category.The A5 Coupe failed to appear in our 2020 Driver Power customer satisfaction survey but the closely related five-door Audi A5 Sportback only managed 70th out of the 75 cars ranked. That’s far from great, and can be blamed on high servicing costs, gripes with the safety features and reliability. A slightly above average proportion of buyers (16%) reported faults in the first year of ownership.

• Most reliable cars you can buy

We’ve no concerns about the Audi A5 in terms of safety. It’s just about mechanically and structurally identical to the A4, to the extent that Euro NCAP has scored both models together. That means the A5 gets the full five stars, including an 89% adult occupant protection rating.

There’s plenty of standard safety kit, alongside all the mandatory equipment such as electronic stability control, anti-lock brakes, a host of airbags, tyre-pressure sensors and ISOFIX child-seat mounts. There’s also Audi’s pre-sense city system, which can stop the car automatically at low speeds to either stop or reduce the impact of a collision.