Audi knows its customers want more from the A5 than simply good looks and a fashionable image. Fleet buyers account for an increasingly important share of the executive coupe market, where running costs are all-important. Fortunately, the A5 can be chosen with a remarkably economical diesel engine.

The 161bhp 2.0-litre diesel model returns up to 55.4mpg and CO2 emissions of 133g/km for a middling Benefit-in-Kind (BiK) band. Opting for the more powerful 40 TDI engine automatically brings quattro four-wheel-drive, and that sees fuel economy drop to 49.6mpg, with CO2 emissions shooting up to just over 150g/km. Because Audi’s engines aren’t compliant with the latest RDE2 emissions, it sits in the highest BiK band, so this model won't be popular with company-car drivers. 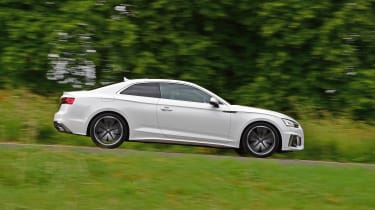 Lower-mileage drivers might prefer the one remaining petrol engine. With the 148bhp engine no longer offered, you get 187bhp, two-wheel drive and an S tronic automatic gearbox as standard, badged 40 TFSI. Fuel economy stands at 42.8mpg and emissions are 150-152g/km, for a BiK rating that matches the 35 TDI.

After the first year's CO2-based road tax (generally included in the on-the-road price), all Audi A5 Coupes cost £150 a year to tax. Unless you buy a base-spec car with the standard solid paint colours, the cost will rise to over £40,000, and then you’re liable for an additional surcharge of £325 a year in years two to six, bringing the annual bill to £475 during that period.

In terms of residual values, Audis tend to stand up well on the used market. Therefore, we don’t expect the A5 – which sells in smaller numbers than the A4 – to depreciate all that much and residual values should remain pretty strong.

As with all Audis, the A5 comes with a three-year/60,000-mile warranty. While this isn’t bad, it’s a little way behind its rivals (although exactly the same as Lexus offers). Both Mercedes and BMW also offer three-year warranties as standard, but they don’t have mileage limits – a boon considering these cars’ likely high mileages.