The Audi Q7 is loaded with cutting-edge safety technology 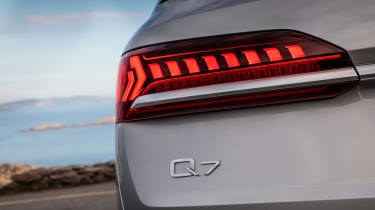 When tested by Euro NCAP in late 2019, the Q7 performed strongly, scoring a five-star safety rating. The Q7’s reliability, though, is less straightforward, thanks to fiendishly complicated electrical systems, with an arsenal of cameras, sensors and powerful computer processors built into the car. Only time will tell whether they can remain glitch-free for the lifetime of the car, but there have been reports of teething problems with certain systems on recent Audi models that should have been ironed out by now.

Audi didn’t perform too well in our Driver Power 2020 satisfaction survey, though. Although too few Q7 owners participated for it to be individually rated, the Audi brand finished 21st out of 30 carmakers surveyed. Owners of cars from the German brand are generally pleased with their engines, gearboxes and the ride and handling of their cars, although reliability and build quality disappointed and 20% of owners reported experiencing at least one fault within the first year of ownership.

Audi's overall score was further dragged down by low scores for practicality, although it's hard to imagine Q7 owners complaining of restricted boot space.

In late 2019, the Q7 underwent Euro NCAP crash testing and was awarded the maximum five stars. The car scored 92% and 88% for adult and child occupant protection respectively. It also scored well in the safety assist category, scoring 72% overall thanks to an array of standard safety tech.

That safety tech should take some of the stress out of driving while also keeping you and your passengers out of harm's way. Standard equipment includes rear parking sensors, cruise control, an adjustable speed limiter and an automatic braking function at low speeds.

Optional systems include autonomous parking assistance and active lane-keeping assistance. One step up from that is something called traffic-jam assistance. A development of adaptive cruise control, it can take over the steering, braking and accelerating on well marked roads at up to 37mph.

The Q7 offers six ISOFIX mounts on all models, which is brilliant news for people with young families. One impressive piece of optional technology is the four-wheel steering, which gives the Q7 a tighter turning circle than the Audi A4.

Euro NCAP awarded the Audi Q7 the maximum five-star crash-test score, as well as 94% and 88% respectively for adult and child occupant protection.