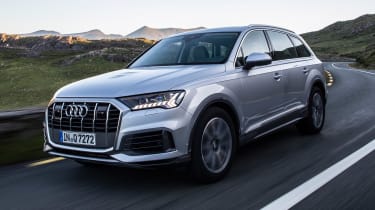 The Audi Q7 is available with a choice of two 3.0-litre diesel engines, which keep it relatively economical, along with a petrol V6 of the same size, and all three are mild-hybrids. Customers can also choose from two plug-in hybrids, and while these aren't cheap, running costs will be very affordable.

The extremely fast SQ7 version now uses a 500bhp twin-turbocharged 4.0-litre V8 petrol engine, after the outgoing diesel V8 was discontinued in mid-2020. The switch to petrol power has made it faster than before but more expensive to run. However, when you consider the power the SQ7 has available and the way it can swiftly get up to speed with seven people on board and their luggage, the poor fuel economy seems like a fairly minor compromise for most owners.

Depreciation is often an issue with large, expensive cars like this, however, the sheer desirability of the Audi badge helps minimise it for the Q7.

Fuel-efficiency figures for the Audi Q7 ranges are comparable to its high-riding rivals such as the Range Rover and BMW X5 thanks to the addition of mild-hybrid kit. Under the revised WLTP economy tests, the 45 and 55 TDI diesel engines are the most frugal, with both versions capable of up to 34mpg. Picking the 55 TFSI petrol engine sees this figure fall to 27.4mpg.

This 48-volt mild-hybrid system uses a belt-driven alternator starter to recuperate energy during braking and store it in a small lithium-ion battery pack. This can be used to power the car with the engine shut-off if the driver coasts at speeds of 34 to 99mph, or when stopped in traffic, saving fuel and cutting emissions.

Two plug-in hybrids badged 55 TFSI e and 60 TFSI e get a far larger battery pack than the mild hybrid models, measuring 17.3kWh in capacity - not far off that of the original Renault ZOE electric city car. In the massive Q7 it's enough to propel the car for around 26 miles without using any petrol, and it can be charged in around two hours using a 7kW home wallbox.

Fuel economy figures for the entry-level 55 TFSI e plug-in hybrid model are claimed to be up to 88.3mpg, with CO2 emissions of 72-75g/km. The efficiency numbers for the more powerful 60 TFSI e PHEV are yet to be confirmed but are expected to be similar to the entry-level model.

After the first year's CO2-based road tax (generally included in the on-the-road price), Audi Q7s cost £150 a year to tax (£140 for the plug-in hybrid versions). With a list price of more than £40,000, it’s also liable for an additional surcharge of £32 a year in years two to six, bringing the annual bill to £475 during that period. 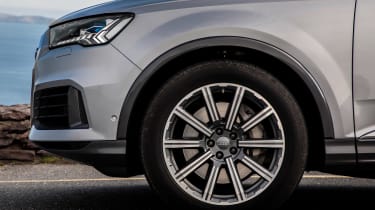 Like all Audis, the Q7 makes do with the three-year/60,000-mile warranty, which, although decent, is a little behind rivals BMW and Mercedes, neither of which put a mileage limit on their three-year warranties.