The new Audi Q7 is considerably lighter than the old one 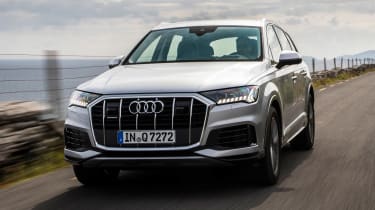 If you frequently need a car that performs well off-road, you'd be better off with a Range Rover than a Q7. The Audi does have four-wheel drive, though, so it can cope with muddy fields and slippery tracks thanks to the system's ability to shift power to the wheels with the most grip.

Its high ground clearance helps to cushion passengers from big bumps, and with adaptive air suspension, the Q7 really does glide over rough roads. Agility is further helped by an optional four-wheel-steering system that turns the rear tyres by two degrees with the front wheels at high speeds. At lower speeds, they turn up to five degrees in the opposite direction to the fronts, reducing the car's turning circle by a metre.

The new Q7 performs well at speed, too – weighing less than the previous generation model means it changes direction much quicker than its predecessor and feels very stable when cruising quickly – you can throw it around corners like something around half its size and it feels more composed than a Range Rover or Volvo XC90. The SQ7’s clever electromechanical active roll stabilisation – an option in the UK – does a cracking job of minimising body lean on twistier roads.

The least powerful 228bhp 3.0-litre diesel engine takes 7.3 seconds to go from 0-62mph and has an impressive amount of pulling power from low down in the rev range. This means the Q7 shouldn't have any problems gathering pace, even when fully laden. However this entry-level diesel can feel strained at speed. It's also noisier when pushed, producing a noticeable diesel rattle, so we would recommend the more powerful diesel engine. 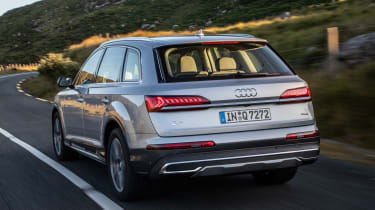 The 282bhp version of the same turbocharged engine takes the Audi Q7 from 0-62mph in around six seconds. Power is delivered smoothly, partly thanks to the Q7's eight-speed automatic gearbox, so even when you accelerate hard, the car stays composed and unflustered. We would suggest leaving it in Dynamic mode, as this makes it downshift quicker when you press the accelerator. The engine's character is all part of the new Q7's image: you quickly realise that Audi has tried to make the car as comfortable and luxurious as possible and the driving experience forms an important part of that.

The standalone non-hybrid petrol engine in the standard Q7 range is badged 55 TFSI and produces 335bhp. It gets its power from a turbocharged 3.0-litre V6 engine, and is the quickest model in the Q7 line-up with a 0-62mph time of 5.9 seconds. It’s an impressive time considering the car weighs well over two tonnes. A downside of the performance offered by this model is the fuel economy, which is officially claimed to be 26.9mpg but will drop to the low twenties during normal driving.

If you want power above all else, the flagship SQ7 is the one to go for. It has a twin-turbocharged 4.0-litre V8 petrol engine that produces 500bhp, an increase of 71bhp over the outgoing V8 diesel engine. The switch to petrol power has had a considerable impact on the car’s performance, reducing the benchmark 0-62mph time from just under five seconds, to 4.1 seconds.

The engine upgrade has given the car a feel more in keeping with a performance car, which is in itself a little strange for what is a large seven-seat family SUV. What sets the SQ7 apart from other hot SUVs is its lack of hardcore ‘RS’ engineering. Unlike Audi’s performance flagship SUV, the RS Q8, which is powered by a 600bhp V8 engine, the SQ7 is more comfortable and refined to drive.

Where some performance SUVs are compromised by their huge performance, the SQ7 delivers its power smoothly to four-wheels via the standard quattro all-wheel-drive and an eight-speed automatic gearbox with no drama. The ride quality is excellent, too, with the revised adaptive air suspension in its comfort setting giving a more forgiving feel than the Mercedes-AMG GLS or BMW X5M.

Like every large sporty SUV, the handling is competent enough, with decent body control despite some lean in corners - not unexpected for a car of this size and weight. Despite that, the SQ7 feels controllable and placing it on the road is easy enough thanks to the clever active all-wheel steering system.

You can also choose the Audi Q7 55 TFSIe or 60 TFSIe Competition, with 375bhp and 449bhp respectively. We've tested the latter, which gets its power from a 335bhp petrol V6 and a 134bhp electric motor. It has four-wheel drive and an eight-speed automatic gearbox. Needless to say, it feels incredibly rapid for such a big vehicle, and the electric motor can take it up to motorway speeds alone if you're gentle with the accelerator. Press harder and the pair act as a hybrid, with a near-seamless transition and smooth gear changes. It's an impressively refined and relaxed cruiser.