The Audi Q7 has seven seats and a very flexible layout 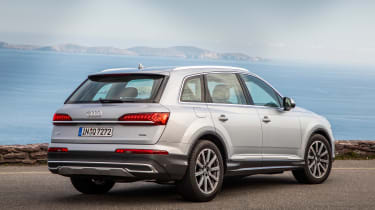 The Audi Q7 is slightly smaller than the original version, but thanks to some clever design and thinner seats, there's actually more head and legroom in all three rows in the new car. There's a decent amount of interior storage space, too.

All seats except the driver's have ISOFIX child-seat mounting points, hidden behind removable flaps. The seven-seat layout is fully configurable, too, so the car is very versatile.

All models seat seven, and the second-row seats slide and recline individually. The middle seat is thinner than the other two, but still a decent size for adults to comfortably sit in. Plus, the transmission tunnel that runs down the floor is low and wide, so it acts like a foot stool rather than an obstruction. Housed in the central seat is a foldable armrest with a pair of built-in cup-holders.

The third row is designed to seat children, but smaller adults can squeeze in there for shorter journeys, as long as the second row is placed as far forward as it can go. To make access to the third row easier, the second row can fold and tip forwards to let you through.

The plug-in hybrid e-tron model does without the two rear seats to accommodate batteries under the boot floor, making it a strict five-seater. 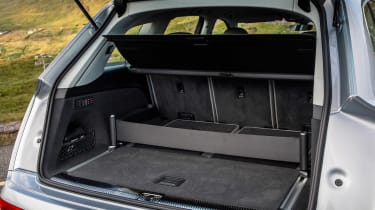 To free up more boot space when you don't have anyone sitting in the very back, there's a button at one side of the boot that folds the third-row seats flush with the floor. With all seven seats in place, there's as much boot space as you'll find in a supermini, accessed via a powered bootlid, but that expands to 865 litres when you collapse the third row by holding the button. Fold the second row of seats as well as the third and there's a massive 2,050 litres to play with – around 100 litres more than in the Volvo XC90. You can also fold the rear seats individually, so carrying large amounts of luggage is still possible with six people on board.

The boot's huge opening makes loading big objects easy. The loading surface is perfectly level with the third row of seats folded and the lip is 46mm lower than the one in the previous Q7, making it even easier to load heavy and awkward items into the back.

Boot space is slightly reduced in the e-tron model, too, due to the batteries being located beneath the floor. Capacity drops to 650 litres, although this should still be plenty for most families.

If you tow a caravan, you're in for a treat. There's a Trailer Pack on the options list, which includes a power-folding towbar and Trailer Assist, a system similar to self-parking, which can take the stress out of reversing a trailer. The Q7 can tow up to 3.5 tonnes with air suspension fitted.