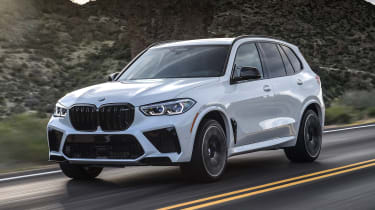 This is the third-generation BMW X5 M, the fastest, best-handling version of BMW's popular SUV. The original was one of the very first high-riding models designed to go quickly on tarmac instead of off-road, and was even launched at Road Atlanta race track in the USA.

With 616bhp from its thumping 4.4-litre V8, the latest version certainly needs a private circuit to display its full potential. Engage launch control and its eight-speed automatic gearbox and four-wheel drive will help it romp from 0-62mph in just 3.9 seconds. Only an SUV with the instant torque of electric motors is likely to beat it off the line.

Considering its heavy weight, the X5 is also impressively composed in corners, while vast tyres ensure there’s huge grip. Despite such wide rubber and huge 21-inch wheels (22s are also available), the X5 M Competition somehow avoids feeling cumbersome, with responsive steering and a clever differential that can juggle power between the wheels. 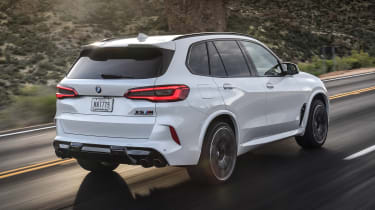 Not only is this undeniably the fastest X5 ever, it has the best interior too. BMW quality has been improving steadily in recent years, and the use of materials - including leather on the top of the dashboard - gives the interior a top-notch feel. The large screens for the instruments and sat nav look clear and prove easy to navigate. There's plenty of space for passenger too, with ample room for adults well over six-foot in the back. However, the boot shrinks slightly to 580 litres as part of the performance makeover.

While X5 M owners will be happy to discuss the performance stats, they may become more bashful when questioned about economy. According to the more realistic WLTP cycle, it should return up to 22mpg, while CO2 emissions of over 290g/km place it in the highest BiK band for company-car drivers. 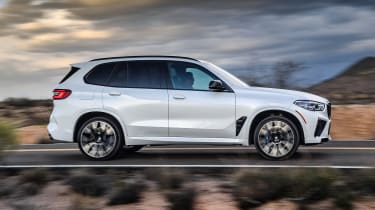 This is in the same ballpark as the Porsche Cayenne Turbo (20.8mpg), however that model is also available as a plug-in hybrid. Supercharged 5.0-litre V8 versions of the Range Rover Sport also struggle to manage around 20mpg and emit over 300g/km. Other running costs will also easily compete with a top flight sports car, from insurance to £470 annual road tax (in the first five renewal years), and the cost of tyres and brakes.

Like most modern performance cars, you'll need to choose your driving mode as you approach an inviting stretch of road. The X5 M has ‘Road’, ‘Sport’ and ‘Track’, along with individual settings that can be summoned by the prominent red 'M' buttons on the steering wheel. We found putting most settings in Sport but leaving the suspension in its softest Road mode worked best. 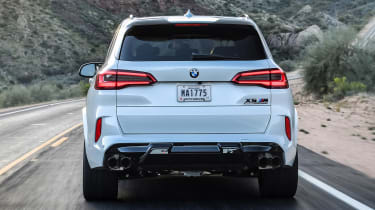 The 4.4-litre twin-turbo V8 is a superb engine, getting this big SUV from 0-62mph in just 3.9 seconds, helped by frantic changes from the eight-speed automatic gearbox. There's a crescendo at the peak of each gear, quite unlike the linear and relentless pull of electric rivals like the Tesla Model X. It's made all the more exciting by a V8 soundtrack that's boosted through the speakers but sounds convincing enough. With 616bhp, it has almost 50bhp more than the outgoing model and 73bhp more than a Porsche Cayenne Turbo. 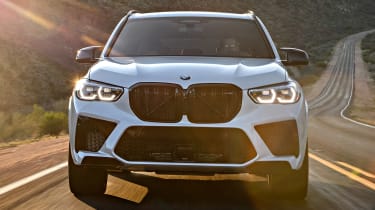 Perhaps the biggest compliment you can pay the X5 M, is that it doesn't feel its 2.3 tonnes. In corners it remains flat and has lots of grip, with plenty of power going to the rear wheels to ensure it feels balanced and resists understeer. The steering even feels fairly communicative - a rarity in modern performance SUVs - and is quick enough to help the X5 M's sense of agility.

The latest interior is a heavy hitter when it comes to in-car technology, featuring two 12.3-inch displays for the instruments and infotainment setup. These offer crisp graphics and the newest version of BMW's iDrive interface, which is one of the best in the business to use. The instrument display doesn't offer quite the level of adjustment of Audi's, though. 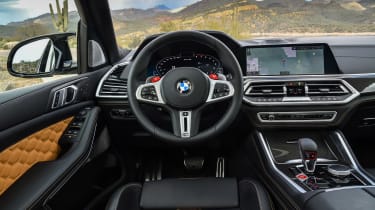 Essentially its own distinct model in the X5 lineup, the M is lavishly specced with 21- or 22-inch alloy wheels, adaptive LED headlights, a head-up display with M readouts, an M exhaust and a Harman Kardon sound system. Leather sports seats are also included, in a range of colours ranging from black to bolder options like black with striking beige inserts.

One issue that's generated by the huge wheels and firm suspension is a rather fidgety ride. If you're used to a cosseting SUV with a compliant ride, the X5 M Competition may come as a shock, even in its softest Road setting.

Options include an M Driver's Package that raises the top speed limiter to 190mph and includes a one-day training course at a BMW Driving Experience. Headlights with laser technology can be added, or you can go the whole hog and add the Ultimate Package, with highlights such as acoustic glass, a panoramic sunroof, ventilated seats, soft-close doors, a Bowers and Wilkins Diamond sound system, rear-seat entertainment and even a carbon-fibre engine cover.

Luggage capacity is reduced but this is still a big car

It may be able to lap the Nurburgring faster than many low-slung sports coupes, but the X5 M still has a large 580-litre boot that expands to 1,530 litres with the seats folded down. This is smaller than the standard X5, with 645 litres behind the back seats. It still features a split tailgate too, making it easy to load items and providing a place to enjoy a trackside picnic. 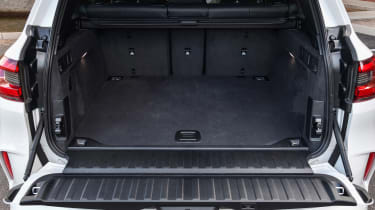 Despite the bulky sports seats, there's still lots of space for taller adults in the front and back of the X5, so longer trips certainly shouldn't be an issue. Unlike some sports saloons, there's a full bench in the back, with a fairly wide squab for the middle seat.

The BMW X5 is a complex car, which may worry some buyers. While it didn't appear in our Driver Power 2020 results, the BMW 5 Series it shares parts with came 40th out of the top 75 models, with an above average score for reliability and build quality. The BMW brand came 27th out of 30 manufacturers overall, which is certainly cause for some concern, although it’s still one spot ahead of rivals Mercedes. 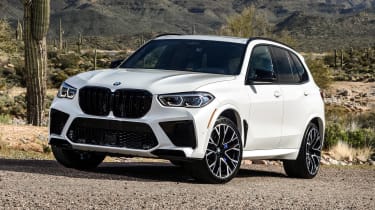 Standard safety equipment includes a host of airbags and front headrests designed to help reduce whiplash. This, along with lots of active safety tech, helped the X5 achieve a five-star safety rating from Euro NCAP following its crash tests. Sensors allow the X5 to automatically brake and steer to help avoid a collision with other vehicles or pedestrians. 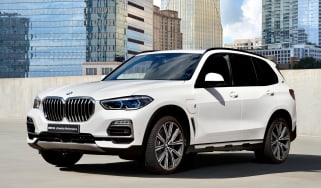 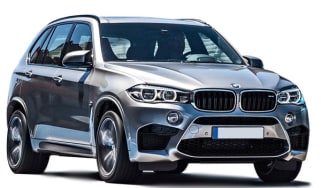 “The BMW X5 M is just as practical as the regular SUV, but offers huge performance if you can afford its running costs”
Skip to ContentSkip to Footer