There's little doubt that the original BMW X5 was something of a revelation when it hit the market almost 20 years ago. In an age where most SUVs were cumbersome, heavy cars with separate chassis, the car-like dynamics of the X5 were something of a treat, and its chiselled looks turned plenty of heads.

Today, the X5's rivals have caught up. The Mercedes ML has evolved to become the GLE, the Range Rover Sport is thoroughly deserving of the name and the Audi Q7, which was late in joining the German SUV party, is now in its second incarnation. And above all these, the X5's sporting character is easily matched by the Porsche Cayenne. 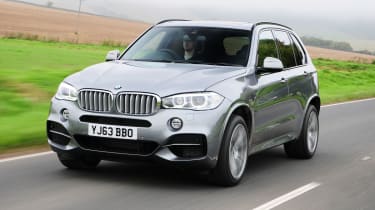 To ensure its continued popularity, BMW offers the X5 in a variety of guises. So complex is the range that it pays to do some homework to avoid the risk of being bamboozled in the showroom. Importantly, the X5 is a five-seater as standard, but there's the option of two extra seats for another £1,000-£1,500 depending on the exact model. There are also no fewer than seven engines to choose from.

The 25d uses a 2.0-litre diesel engine – the smallest yet offered in an X5 – although the 227bhp it produces is a match for many far bigger engines. It's worth noting, too, that it's the only model you can choose with either sDrive rear-wheel drive or xDrive four-wheel drive. The 30d, 40d and M50d are four-wheel-drive only and all use a 3.0-litre diesel engine, but with different levels of turbocharging to produce 254, 309 or 381bhp.

The latter makes the X5 a very fast car indeed, but the petrol-engined models have even more power to offer. Both use a 4.4-litre V8, with the 50i producing 450bhp and the X5M a massive 567bhp. This really is a specialist performance model, and we've reviewed it separately

After all that, you’ll be glad to know the X5 is only offered in two trim levels. SE cars come with leather seats, BMW’s iDrive infotainment system complete with sat nav, heated front seats, a split-opening boot (the top portion of which is opens electrically), cruise control, a DAB radio and a number of other toys too numerous to list. The highly popular M Sport package adds, for about £3,000, sports suspension, some upgraded interior trim details and what amounts to an aggressive bodykit.

What’s it actually like as a car? Very impressive. The X5 is more agile and easier to drive than you might imagine, while the interior is extremely comfortable, well made and luxuriously appointed. Interior space is generous and the 650-litre boot is vast, though be aware if you order it as a seven-seater the rearmost seats are tight, and the Land Rover Discovery is better in this regard.

In the final analysis, the X5 is one of a crop of supremely well-engineered large SUVs, and has no major shortcomings. The Audi Q7 is slightly nicer inside, the Porsche Cayenne is better to drive, while the Mercedes GLE is arguably smoother and more relaxing – but the X5 is cheaper than the Porsche, feels more car-like than the Audi and is more modern than the Mercedes.