A line-up dominated by extremely efficient diesel engines means the BMW X5 is – at least from a fuel consumption and road tax point of view – relatively inexpensive to run. Generous standard specification and prices that undercut the equivalent Range Rover Sport and Mercedes M-Class only strengthen its case further.

The value the X5 will shed over the first few years of ownership is average for this type of vehicle, although still pretty high in cash terms. High-mileage business users should find the X5's three-year/unlimited-mileage warranty attractive, not to mention the model's servicing costs, which are on par with Audi's and cheaper than Porsche's.

Without doubt, the least efficient X5 in the range is the X5 50i. Its 4.4-litre twin-turbo V8 petrol engine produces an impressive amount of power, but returns just 29.4mpg economy and attracts a top-rate Benefit-in-Kind (BiK) rate of 37%, thanks to CO2 emissions of 226g/km. For business as well as private users on a budget, it's pretty hard to justify. 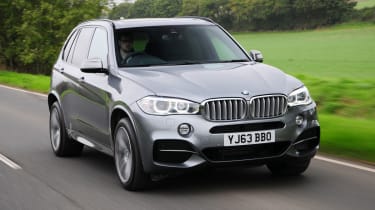 Instead, such buyers would be better off considering the basic, economy-oriented sDrive25d model. Thanks to its modest, though still reasonably powerful, 2.0-litre engine, and the fact that only two of its wheels (the rears) are driven, it returns up to 53.3mpg fuel economy gets a 29% BiK rating.

Remarkably, the addition of four-wheel drive to the xDrive25d only dents those figures slightly (50.4mpg and 31%). It costs around £2,000 more than the two-wheel-drive version, although when you go to sell it, you may well find its greater appeal to used-car buyers means it's held on to more of its value.

In our view, the more powerful 3.0-litre xDrive30d offers the best balance of fuel economy, price and likely resale value. It costs around £2,500 more than the xDrive25d, but does 47.9mpg and is rated 33% BiK for company car users.

The still more powerful xDrive40d is only slightly less efficient (47.1mpg), while even the mighty range-topping xDrive M50d returns 42.8mpg.

The model that will appeal to company car drivers most will be the X5 xDrive40e plug-in hybrid. It emits just 78g/km of CO2 for a 17% BiK charge, and BMW claims it's capable of 83mpg, but you'll need to be plugging it in as often as possible to get anywhere near this figure.

Check specific cars' CO2 emissions, though, because these vary depending on alloy wheel size.

Thanks to a new road tax regime, all X5s cost £140 a year to tax – except the 40e iPerformance, which qualifies for the slightly lower rate of £130. Due to a plus-£40,000 list price, however, an additional annual charge of £310 applies to all X5s, and this runs from years two to six of the car's life.

The X5 occupies insurance groups 41 (the sDrive25d) to 49 (the xDrive M50d). For a competitive quote, it might be worth trying BMW's own insurance scheme.

The X5 comes with BMW's three-year/unlimited-mileage warranty. This is the equal of Mercedes and Range Rover, but better than Audi (which is limited to 60,000 miles) and Porsche (which offers a two-year/unlimited-mileage guarantee). It should certainly give high-mileage drivers peace of mind. Anyone looking to keep their car for longer than three years can purchase an extended warranty.

A BMW X5 will cost around the same as an Audi Q7 or Range Rover Sport to service, so it's not cheap. However, you can spread the cost with BMW's Service Inclusive package. This allows buyers to make a one-off payment to cover servicing and MOTs for up to five years or 50,000 miles.