If carrying extra passengers is more important to you than boot space, an optional third row of seats can be specified on the BMW X5

The BMW X5 is an SUV, but with its large cabin and numerous storage places, it could equally double as an MPV or people carrier. Children will love the commanding view out, as will parents, while also appreciating the large door bins, pockets and cubbyholes for holding things like water bottles and CDs.

Boot space is good, but not outstanding. Generous towing limits as high as 3,500kg mean the X5 is more than capable of towing a twin-axle caravan or a powerboat on a trailer.

The front of the X5 feels very broad and expansive, an impression heightened by the car's large and comfortable leather seats. The rear cabin feels equally spacious, with plenty of room for three adults on the rear seats. Even the middle passenger can get comfortable thanks to a wide centre seat and the X5's flat floor. There's plenty of headroom, too, which even the optional panoramic sunroof doesn't reduce too much. The X5 can be had with seven seats, instead of the usual five, but the X5 M is strictly for five occupants only, as is the plug-in hybrid xDrive40e. 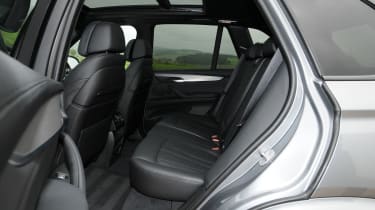 With the rear seats up, the X5's boot measures 650 litres and with them down it expands to 1,870 litres. That should be enough and for most people it probably is, but the Mercedes M-Class is larger, at 690 and 2,010 litres respectively. On the plus side, the X5's tailgate is split horizontally to help with loading of heavy objects, as well as enabling it to be opened in confined spaces. 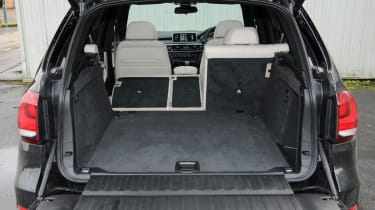 If carrying additional passengers is more important to you than outright boot space, an optional third row of rear seats is available for around £1,400. This might even aid the car's resale prospects.

If you go for the xDrive40e, the car's hybrid system reduces boot space to 500 litres, which trails some of its rivals like the Volvo XC90, which itself retains the two extra rear seats for extra practicality.

In xDrive form (when the additional traction could be useful on slippery surfaces such as slipways) and with one of the 3.0-litre diesel engines for extra pulling power, the X5 makes a great towing car. It has weight and stability firmly on its side, plus towing limits that, depending on the engine, range from 2,700kg to 3,500kg. The optional electric tow bar costs around £1,000 and stores neatly out of sight under the car until it's required.