The BMW X5 has diesel engines in two sizes and four power outputs, plus a very smooth automatic gearbox

This BMW X5 is slightly lighter than the previous model, but still weighs at least 2,070kg. That sounds like a recipe for plodding performance given the vehicle's high-sided profile, but remarkably the X5 is a lithe and crisp-handling car with good body control in corners.

Downsides are steering that has a slightly unnatural feel and is slow to self-centre when exiting bends, plus the fact that the X5 is no serious off-roader. There's also far too much wind and road noise on A-roads and motorways. 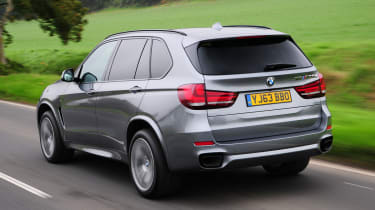 The 4.4-litre V8 petrol engine is smooth and powerful, but such is the efficiency and refinement of modern diesel engines like those powering the X5, it's rendered largely irrelevant. The diesels come in two sizes and four power outputs, while all engines, petrol and diesel, drive the wheels through an eight-speed automatic gearbox that's smooth enough to disguise the X5's strong performance extremely well.

It isn't the cleanest or most frugal model in the range and its resale prospects may not be the brightest, but the 4.4-litre twin-turbo V8-powered X5 50i is at least capable of showing many performance cars a clean pair of wheels. For example, it can sprint from 0-62mph in 4.9 seconds – not far shy of a BMW M4 Coupe. It's just beaten by the Mercedes ML 63 AMG.

The 40e plug-in hybrid uses a 2.0-litre petrol engine supported by an electric motor to get the car from 0-62mph in 6.8 seconds. This model is capable of running on electric power alone, but should it resort to running on petrol, you can expect its fuel economy to fall away sharply. It'll go for up to 19 miles on electric power alone before the engine cuts in, but when it does, it does so quietly and unintrusively. The rest of the car's driving experience is just the same as any other X5, so it's comfortable and relaxed as opposed to feeling sporty like you might expect from a BMW. It can feel a little fidgety on the motorway and the suspension is quite firm, though.

If out-and-out performance is not your primary goal, you'll find the X5's diesel engines more than adequate. The basic X5 25d, in two and four-wheel-drive form, is powered by a 2.0-litre, four-cylinder engine producing 228bhp. It takes a respectable 7.7 seconds to get from 0-62mph.

However, if you want strong pulling power and a more refined driving experience, the 3.0-litre six-cylinder diesels are better. There are three: the 255bhp in the 30d that's good for 0-62mph in 6.8 seconds (our pick of the line-up), the 308bhp in the 40d for a sprint time of 5.9 seconds, and the 375bhp version in the 50d that brings the 0-62mph time down to a Porsche Cayenne S Diesel-beating 5.3 seconds.

All of the 3.0-litre diesels drive in broadly the same way – that is, smoothly, quickly and through an excellent automatic gearbox. The only real points of difference are their straight-line performance (although none is slow) and the price you pay for them in the first place.