Large, high-riding and packed with safety aids as standard, the BMW X5 has all the credentials to be a very safe family SUV. Previous versions have scored well in Euro NCAP crash tests, although the latest X5 has yet to be tested.

The X5 hasn't always performed well in our Driver Power survey, though, although BMW as a brand did finish ahead of its German Audi and Mercedes rivals in 2017.

Unfortunately, too few BMW X5 owners participated in our 2017 Driver Power owner satisfaction survey for it to be scored individually. It's worth looking at the opinions of owners of other BMW models. The BMW 1 Series hatchback came 41st and the BMW 3 Series Saloon finished 37th out of 75 models in the survey, but the company's best result came with the BMW 4 Series, which finished in a creditable 22nd place.

BMW itself finished in 9th position overall out of 27 manufacturers covered by the survey. Engines, gearboxes, and acceleration came in for high praise, but running costs weren't so well regarded – the brand finished in 18th place in this category.. A 9th place rating for ride and handling narrowly beat its Audi and Mercedes rivals, though, and BMW's in-car technology was rewarded with a sixth-place ranking.

Reliability and build quality were rated in a solid ninth place, though 12.4% of owners reported having experienced at least one fault during the first year of ownership. 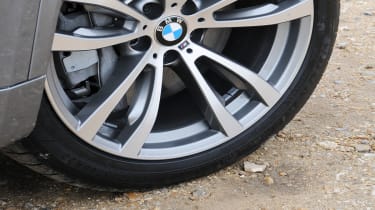 Fortunately, the X5 wants for little when it comes to safety equipment. There are numerous airbags front and rear, although there's no provision for one for the optional third seating row.

There are braking assistance and traction-control systems, plus hill-descent control (useful when traversing steep gradients). The active cruise-control system incorporates automatic braking to help keep a safe distance from the car in front.

In addition, there's automatic headlight activation and a tyre-pressure monitoring system so you can keep a regular eye on the condition of the tyres. Meanwhile, parking sensors help make light work of low-speed manoeuvres.