Practicality is never the strong suit of a convertible, but the Audi TT Roadster does have a 280-litre boot

As always, the price you pay for open-top motoring is reduced practicality, but in the TT Roadster, the sacrifice isn’t as big as you might expect. You do lose the two occasional rear seats from the Coupe, but they’re only really suitable for children anyway. Plus, the Roadster’s boot is only slightly smaller than the Coupe’s and unlike in many convertible rivals, it doesn’t get smaller when you fold the roof down.

Although you drop low into the TT’s seats, the car’s wide-opening doors and relatively narrow sills make it quite easy for most people to get in and out – which is a lot more than can be said for sporty rivals such as the Lotus Elise.

Up front, there’s a single cup-holder, a small storage cubby in the armrest and another in front of the gearlever, plus narrow pockets in both doors. If you connect your phone to the car through Bluetooth, hands-free calls are still possible with the roof down, thanks to a microphone built into the seatbelt. 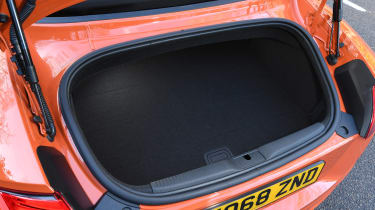 The folding roof takes up the space used for rear seats in the Coupe, so there isn’t quite as much room for bags in the Roadster.

Boot capacity in the Roadster is 280 litres – only 25 litres less than in the Coupe. Although the boot has a small opening and is quite shallow, it’s surprisingly long, so you may be able to get more in there than you’d think.

An elasticated net in the middle of the boot is handy for tying down individual bags if you’re planning to go for a drive on twisty roads, while a hatch in the rear seats allows you to load longer items that would otherwise be too big for the boot.