The new Audi TT Roadster should prove safe and reliable

Thanks to a twin-motor folding fabric roof, there’s more to go wrong with the Roadster than the Coupe, but up close the fit and finish of the hood and the action of the mechanism are very impressive, so we wouldn’t anticipate any issues.

Like the Coupe, the Roadster is an all-new model, but its underpinnings are carried over from a whole range of cars made by the VW Group – include the big-selling VW Golf and Audi A3. The same can be said for the engines, which have been tuned specifically for the TT, but use parts already tried and tested in many other cars.

Not enough Audi TT owners responded for the car to feature in our Driver Power 2018 customer-satisfaction survey, but the closely related Audi A3, Volkswagen Golf and Skoda Octavia all featured within the top 50. It’s unlikely that a standard TT Roadster will be any less reliable, but we can’t vouch for the as-yet-unproven RS model.

Audi itself was rated as the 18th-best carmaker in the UK, finishing ahead of its premium rival Mercedes. 18.6% of owners reported at least one fault within the first year of owning an Audi. 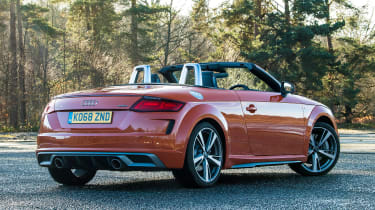 The Audi TT Coupe scored four stars out of five in Euro NCAP crash tests in 2015. The Roadster version has yet to be crash-tested, but it would likely record a similar score.

Safety systems available on the current car include blind-spot monitoring, lane-keeping assistance, parking assistance and traffic-sign recognition – but they’re all fairly expensive optional extras that will push the list price higher than you might have expected.