As already mentioned, the 2 Series Gran Tourer’s engines were first seen in the MINI Cooper hatchback – and they’ve brought their entertaining character and decent refinement with them to the BMW.

Almost all of the engines help the 2 Series Gran Tourer to feel quicker than you might expect, and BMW’s handling prowess mean it doesn’t drive like a typical people-carrier, either. As long as they’re not expecting the Gran Tourer to corner like a 3 Series, most people will be more than happy with it, as it still steers, handles and rides in typically precise BMW fashion. The fact that this familiar driving enjoyment comes from one of only two front-wheel-drive cars in BMW’s range (the other being its smaller sister model, the Active Tourer) is a testament to BMW’s engineering skill.

Avoid the M Sport suspension if possible; the sports setup is just too firm for anything other than the shortest of journeys and can make family trips away irksome. Sport models are relatively well damped and the optional Adaptive Suspension system is a steal at £390.

The two petrol engines available are also used in the sporty MINI Cooper and Cooper S hatchbacks, so they’re sprightly performers. The smaller 136bhp 1.5-litre turbocharged engine is capable of 0-62mph in 9.8 seconds, while the 192bhp turbocharged 2.0-litre reduces that time to 7.9 seconds. 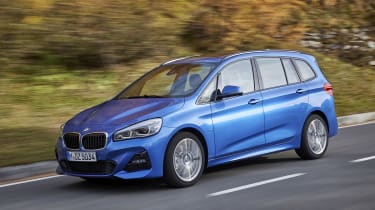 Power delivery is smooth and consistent and unlike some turbo engines, there’s virtually no delay in response from either engine when you want to overtake. At speed, both petrols remain quiet and unobtrusive.

The seven-speed dual-clutch automatic gearbox that's optional across the range (and standard on 220i petrol and 220d diesel) is very good – responsive and smooth without having a harsh effect on economy.

The small 1.5-litre diesel engine feels a little short of breath, as its 116bhp isn’t quite enough for a big seven-seater car like the Gran Tourer. This is the slowest model in the line-up, managing a 0-62mph time of 11.4 seconds.The larger 2.0-litre diesel in the 218d is the best all-rounder. It’s smooth and refined at speed and manages to be quieter than you might think – there’s no hint of the infamous diesel ‘clatter’.

The 2.0-litre diesel paired with a four-wheel-drive system in the 220d xDrive begins to feel like overkill. The engine makes for very rapid progress, with a 0-62mph time of 7.8 seconds, but given the car’s intended purpose of family motoring, we think it’s surplus to requirements. We’d only recommend it you make frequent trips down muddy country lanes.