This area is key for the 2 Series Gran Tourer. Happily, it seems to perform relatively well in comparison to its rivals. It has an extra 12cm between the wheels and a further 9cm in the boot compared to the 2 Series Active Tourer. The extra length has freed up room for a third row of two small seats, which can be folded out of the boot floor by pulling a slightly fiddly lever.

Large rear doors and a second row of seats with a quick tilt-and-slide function for the outer seats make getting into the third row easier. And once they’re back there, there’s easily enough room for smaller children.

The Gran Tourer’s glovebox and door bins pass Carbuyer’s ‘big bottle test’ with ease, as they can all hold a 1.5-litre bottle and even third-row passengers have their own cup-holders. 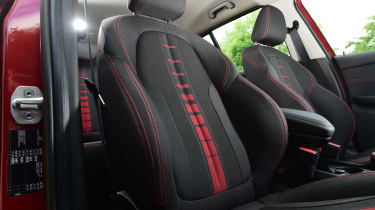 Wide doors and tough kickplates make getting in and out of all seats easy. It also helps that BMW has raised the second row of seats up slightly compared to the Active Tourer, so passengers in the third row can just about slide their feet under the seats in front. Because of this, the Gran Tourer’s roof is 5cm higher to ensure that even with the optional panoramic sunroof fitted, there’s still enough headroom. Shoulder room in the second row is adequate, so three people can sit abreast in relative comfort.

However, unlike in a Citroen C4 Grand Picasso, the seats aren’t all the same size. Instead, there’s a 40:20:40 split with a narrower centre seat that neither slides independently nor has ISOFIX child-seat mounts like the larger outer seats. But BMW is keen to point out that you can still fit a normal baby seat using the seatbelts. 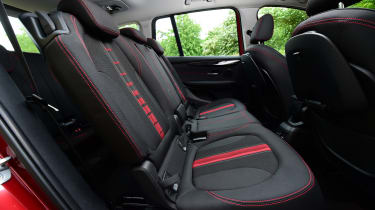 It’s worth mentioning that there’s an option pack available. This includes extra storage kit, such as a folding central armrest with cup-holders in the second row and various strapping and netting throughout the car. It also adds a 12v power socket in the third-row centre console and the boot (although we think this should be standard in a family car like this, where children in the back seats frequently need to be kept entertained with electronic devices. 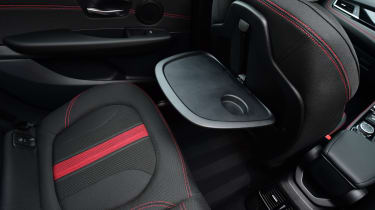 When all seven seats are in place, there's not much room for your kit. Just 145 litres of space is on offer but that's more than what's on offer in the seven seat Volkswagen Touran.

The available boot space swells from the five-seater Active Tourer’s 468 litres to 560 litres in the Gran Tourer. That’s less than the Volkswagen Touran’s 695 litres but more than the Ford Grand C-MAX’s rather miserly 475 litres. 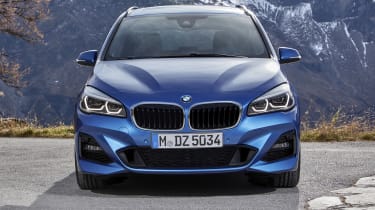 With the seats folded flat, the BMW’s carrying capacity grows to 1,820 litres – a figure which trumps every other BMW apart from the marginally larger X5 SUV. Plus, no load lip and an easy-to-remove parcel shelf that can be stowed under the boot floor further boosts the Gran Tourer’s practicality.