Drive a 3 Series saloon and 3 Series GT back-to-back and you’ll struggle to notice much difference in how they perform. The GT has direct steering, and although there’s more body lean than the saloon, the difference between them is minor and the GT’s suspension is nicely pliant, cushioning passengers from the worst the UK’s roads can offer. The GT is heavier than the saloon, but it doesn’t pitch or wallow over crests. If you’re an enthusiastic driver, then the Adaptive M Sport suspension cuts down on body lean in corners without affecting comfort. 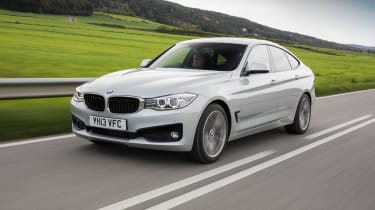 As with the saloon, the GT’s engines are one of the best aspects of the car. The slowest model in the diesel line-up is the 320d GT, but even that can get from 0-62mph in just 7.9 seconds, while the 330d GT does it in just 5.7 seconds and the 335d GT is even quicker, completing the sprint in just 4.9 seconds. The latter is only available with xDrive four-wheel drive, which not only improves grip in wet weather, but also makes the GT a more accomplished tow car.

While still impressive, the 320i and 330i petrol engines make less sense than the diesels. They don’t sound particularly sporty, are slower than the quick diesels (0-62mph takes 8.1 and 6.1 seconds respectively) and will cost a lot more to run. However, if your 3 Series GT is going to be a company car, it’s worth bearing in mind that the petrols are three tax bands below the equivalent diesels on average, which should be taken into consideration when calculating running costs.

If you want a petrol engine, and can afford its higher running costs, then the 340i GT is the model to go for. Its six-cylinder engine has the sporty noise that the other petrols lack and can launch the GT from 0-62mph in just 5.1 seconds. This model is lighter and nimbler than the 335d GT, while its rear-wheel drive makes it particularly good fun from behind the wheel.