The BMW 5 Series GT is built primarily for comfort

Unlike most BMWs, which focus on performance and handling, the BMW 5 Series GT is built primarily for comfort. It aims to combine the best traits of an MPV (a high driving position and plenty of space) but with most of the regular 5 Series’ driving agility preserved intact. It partly succeeds in this, and it’s certainly a relaxing car to drive, with excellent all-round visibility and smooth, powerful engines. Add the optional adjustable dampers and you’ve got one of the most comfortable car BMW has ever built – beating the ride quality of its bigger brother, the 7 Series.

However, the GT’s sheer size makes it feel clumsy in tight spaces, and it’s not as composed during braking and cornering as most BMWs, thanks mainly to its raised ride height and significant extra weight, which shifts around in tighter turns. Ultimately, it’s not quite as comfortable as the saloon, either, feeling a bit more fidgety over small bumps. M Sport models get larger alloys and really look the part, but they’re even more uncomfortable. 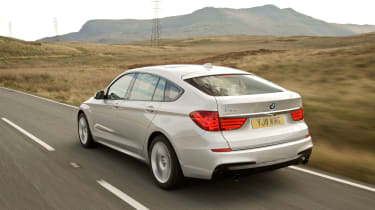 You won't be disappointed by the performance, though, and all models get a brilliant eight-speed automatic gearbox. Ultimately, the 5 Series GT is most at home on the motorway, where its hushed engines and exceptional refinement make it a great long-distance cruiser, especially if you’re in the luxurious rear cabin. However, with the 5 Series Touring estate model being cheaper and equally capable of taking long journeys in its stride, the GT does still seem slightly redundant.

BMW diesel engines always impress, and even the entry-level 520d GT’s 183bhp is enough to get it from 0-62mph in 8.9 seconds. However, this car needs to be pushed hard to gather momentum, so if you do a lot of miles and need smooth acceleration, the larger 3.0-litre diesels are a better bet, as they pack plenty of punch and don’t sound as harsh as the 520d. The 530d GT, for example, has 254bhp and does 0-62mph in just 6.5 seconds.

If you prefer petrol power, then the 535i should suffice. It packs 309bhp and will manage 0-62mph in a very quick 6.1 seconds. But if that still isn’t enough, the mighty 550i GT has a 442bhp 4.4-litre V8 engine and does 0-62mph in five seconds flat, which is almost supercar-like performance. For a similar price, but using twin-turbo diesel power, the Audi A7 BiTDi quattro manages 0-62mph in 5.3 seconds, yet returns a far more respectable 46.3mpg fuel economy.