We’re not convinced by the practicality of the BMW 5 Series GT’s twin-hinged boot. It’s a similar system to the one used by the Skoda Superb, allowing you to open part of it like a saloon’s boot, or open the entire tailgate as you would on a hatchback. The idea behind the concept is that if the 5 Series GT is being used as chauffeur-driven VIP transport, the driver can access the boot without exposing the cabin and its occupants to the elements by opening the entire tailgate.

Practicality for passengers in the rear is very good, especially if you go for the individual rear seats included in the Executive Package. There’s no middle seat when these are fitted, but the car offers plenty of head and legroom thanks to its boxy shape and high roofline. 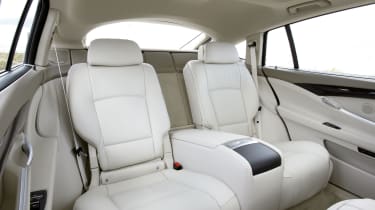 Rear-seat space is excellent – and as mentioned above, you can order individual chairs that recline and slide. There’s as much legroom as you get in the larger 7 Series saloon and lots of headroom, too. If you choose to stick with the standard bench seat in the back, you’ll find the middle seat is pretty useless due to the large transmission tunnel in the floor. 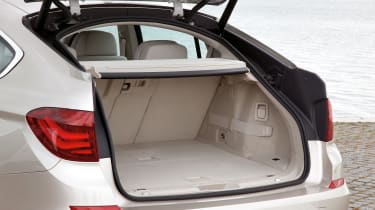 When the hatch is opened up fully, there’s a useful space, but the glass rear screen is very heavy. The 2013 facelift increased the standard boot size to 500 litres (20 litres less than the 5 Series saloon’s), or 650 litres if you slide the rear seats forward as far as possible. Fold them down and you’ll free up a cavernous 1,700-litres of load space, which is 30 litres up on the 5 Series Touring estate and almost on par with the practical Ford C-MAX. Handily, there’s a divider between the luggage area and rear seats, however the GT’s load space isn't totally flat.

The 5 Series GT has some strong petrol and diesel engines, so towing large caravans and trailers presents no problem at all. We’d recommend that you choose a diesel if you tow, though, as the greater mid-range shove these engines is better suited to the demands of hauling something behind you.