The BMW 6 Series coupe’s engines are all quick

Combine a strong selection of engines with a precise driving experience and the 6-Series coupe is a solid choice for performance enthusiasts and high-mileage drivers alike. BMW has always been known to produce entertaining cars and the 6-Series is no exception. Dynamic Drive is an option that further reduces roll in the corners, but it’s an expensive one so we advise trying a car without it before you buy. Strong, durable brakes complete the package. 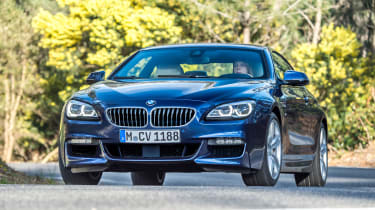 Two petrol engines are available, with the entry-level 3.0-litre six-cylinder producing 320bhp and a 0-60mph time of 5.3 seconds. Go for the quicker 4.4-litre V8 engine in the 650i and the power jumps to 450bhp. That engine is the same as the one in the performance-orientated M6 coupe but without all the M Division’s performance parts bolted on it is not quite as powerful. The 650i still feels massively powerful, while the new standard sports exhaust system on all petrol models gives the engine a real bark. The eight-speed automatic is the only option with this model, but it suits the character of the car rather well, as it’s smooth and relaxed in the automatic mode but responds quickly when using the paddle-shifters in Sport or Sport+. One of the few negative aspects of the car from an enthusiast’s point of view is its overall size – the 6 Series is more suited to a motorway cruise than snaking around country roads. 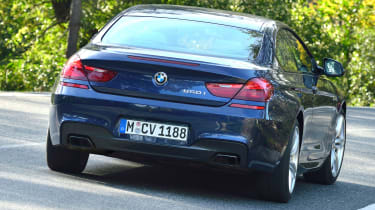 Only one diesel is available for the 6 Series. The 640d has a 3.0-litre six-cylinder engine that produces 309bhp. It’s quick enough to hurl the 6 Series to 60mph in 5.2 seconds – that’s the same time as the basic petrol model but with less of an economy sacrifice. All engines in the range get the 6 Series to 155mph with ease.

The diesel will be the best choice overall, because it offers pretty much all of the performance of the petrols can but with the advantage of lower running costs.