Inside, the BMW 6 Series has an upmarket feel and plenty of space for front-seat occupants, meaning there’s no shortage of legroom if you happen to be driving or lucky enough to nab the front passenger seat. That’s thanks in no small part to the fact that the car is almost 4.9 metres long – a smidge longer than a Range Rover sport. It’s also wider than its rival, the Mercedes E-Class Coupe by more than 100mm at 1,894mm. 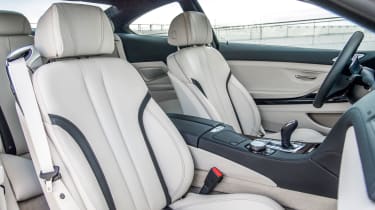 Rear-seat passengers, particularly adults, may get a little uncomfortable on long journeys because of the limited space available. However, surprisingly enough, the 6 Series has a rather big boot, keeping up with the likes of the Mercedes E-Class Coupe in terms of overall size.

Due to the vast length of the 6 Series coupe, front-seat passengers have huge amounts of room. However, the 6 Series does seem to be rather oddly proportioned, as rear passengers suffer with legroom and may feel a bit cramped after a while. The coupe’s sloping roofline doesn’t help either; children will be fine in the back, but tall adult occupants in the rear will really feel the pinch. 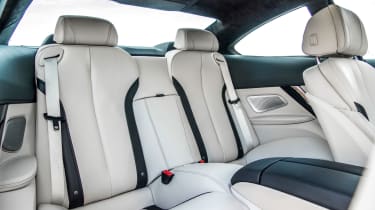 Due to its 2+2 dimensions, there’s only enough room for four passengers in total, as there is no smaller middle seat in the back.

On par with its rivals, the BMW 6 Series coupe has a surprisingly spacious boot for a coupe, at 460 litres. The dimensions mean it’s capable of swallowing two sets of golf clubs with relative ease.

Compared with the Gran Coupe model, the seats in the standard coupe do not fold flat, so any large items you may want to carry might have to be shunted inside for them to fit properly. Lest we forget that a coupe has never been deemed to be the most practical shape for a car.