For a small electric car, the BMW i3 is fairly practical

Don't be fooled by the BMW i3's compact dimensions, because clever packaging means the car is quite roomy inside given its size. BMW’s decision to design the i3 as an electric car from scratch, rather than adapting an existing model, means it’s as spacious and as practical as it can possibly be – although there’s no getting away from the fact it’s a small car. 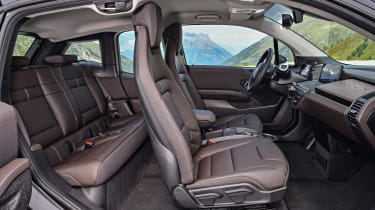 The i3’s spacious design is emphasised by careful use of materials and surfaces that give it a light, airy feel. There’s loads of space in front and a reasonable amount of leg and headroom in the back – although taller adults will find it a little cramped. The i3 is also a strict four-seater and has no seatbelt in the middle of the back seat, but at least large windows let in lots of light and allow a good view out. Storage areas include cup-holders, a cubbyhole under the front armrest, a lidded glovebox and another space in the centre of the dashboard. 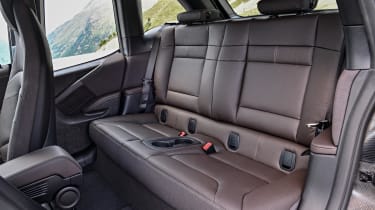 While there’s a flat floor and no central pillar between the doors to get past, accessing the back isn’t as simple as it might be because the i3’s battery pack is stored under the floor. This means that rear passengers have to step up to get into the car, before slumping down somewhat into the seats. Also, although the rear-hinged doors open nice and wide, they can only be opened after first opening those at the front, which means backseat passengers can’t hop out as easily as then can in a car with conventional doors. This is fine once you get the hang of the requisite manoeuvre, but there are cars that are easier to get into.

The i3's boot is quite small at 260 litres, but there's no load lip to lift heavy items over and the rear seats split in half to allow you to extend the boot while also carrying two passengers. With the rear seats folded down, the i3 offers a maximum load capacity of 1,100 litres.

There’s also a small second boot under the bonnet that’s designed for you to store the charging cable. This is a neat touch, as it’s fairly bulky and could slide around and look messy in the main luggage compartment.