Considering its premium status, the BMW X1 returns impressive fuel economy, comparing well with its rivals. A plug-in hybrid is also available, offering an all-electric driving range of around 31 miles before the petrol engine kicks in. It can also be driven in a hybrid mode, automatically juggling petrol and electric power over the course of your journey. 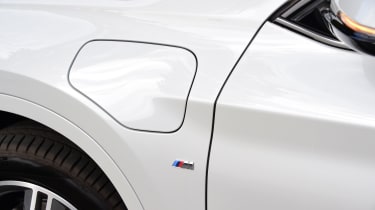 Lower-mileage drivers, or those who make a lot of urban journeys, may prefer a petrol model; the range opens with the 1.5-litre three-cylinder engine that can return up to 42.8mpg. It emits around 150g/km of CO2, but is only available with front-wheel drive as an sDrive18i.

It fits into the range below the 2.0-litre four-cylinder petrols, which can be chosen in sDrive20i front-wheel-drive and xDrive20i four-wheel-drive versions. The former returns up to 40.9mpg, with up to 38.7mpg promised by the latter, both of which use a seven-speed dual-clutch automatic gearbox.

The BMW X1 has a pair of 2.0-litre diesel engines to choose from but their fuel economy and CO2 emissions vary only slightly. The most fuel-efficient version is the sDrive18d, which can return up to 56.5mpg. Its CO2 emissions of 113g/km mean it qualifies for an affordable mid-range Benefit-in-Kind (BiK) rating for company-car users. If you step up to any of the xDrive four-wheel-drive models, fuel-efficiency takes a hit. Still, the xDrive18d can achieve up to 50.4mpg, while the more powerful xDrive20d is capable of up to 49.6mpg, but its CO2 emissions of up to 152g/km make it a more expensive option for company-car drivers.

Business drivers will be better served by the xDrive25e PHEV, which uses its electric motor and battery pack to vastly improve the 1.5-litre petrol's efficiency, at least according to official WLTP figures. Here it returns up to 156.9mpg but its CO2 emissions of 41g/km are even more important, because they put the car in the lowest BiK band of any X1 so far. The plug-in model has an electric range of up to 32 miles, and how often you recharge its battery pack will have a big effect on those economy numbers. Drive locally using electric power and they'll skyrocket; drive a long way on the motorway and once the battery is depleted they'll slowly fall.

The fuel-efficiency of all versions is affected by the size of alloy wheels and type of gearbox you choose, so check to see if the CO2 emissions reflect this before you commit to a model.

All X1s costing less than £40,000 will set you back £150 a year for road tax, but if the price (including any optional extras) creeps above that figure, you’ll have to pay an extra £325 when you purchase road tax in years two to six of ownership. 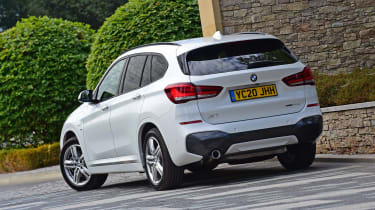 Insurance for the BMW X1 ranges from group 25 for the sDrive18d up to group 34 for the xDrive25d.

Like any BMW, the X1 benefits from a three-year warranty with no upper mileage limit. That’s equal to the cover offered with the Mercedes GLA.

BMW offers fixed-price servicing with a pre-paid scheme that includes regular maintenance of your X1 for five years or 50,000 miles. The more in-depth Service Inclusive Plus pack covers the costs of clutch and brake changes, too.