It might be the first BMW X7, but BMW is hardly a stranger to making luxurious interiors. Everything has been ramped up for the flagship model, with leather, metal and soft-touch plastic covering every surface. It might not have quite the character of a Range Rover, but the X7's layout is arguably more logical and everything is beautifully finished. We just wish it was a bit more distinct from other models in the BMW range.

Standard air suspension across the X7 range means it rides very well, smoothing out bumps and other road imperfections with ease. Even when tested by deep potholes, the suspension cushions the impact, leaving the car’s composure unaffected and occupants unruffled. 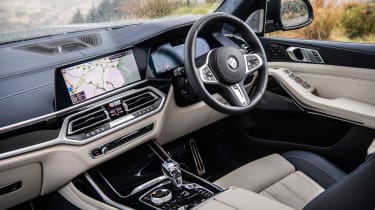 The dashboard is angled towards the driver and dominated by twin 12.3-inch displays; one beneath the instrument binnacle and another in the middle of the dashboard. They're attractive, thanks to sharp graphics, and include a voice recognition system that can carry out tasks like adjusting the climate control if you say "hey BMW, I'm cold". It also features adaptive navigation and Apple CarPlay, although in a rather stingy move, the latter is only provided free for a year, despite coming as standard in many superminis.

There's far too much standard equipment to list here, but if you can imagine a feature, the X7 mostly likely has it. Highlights include a large three-section panoramic sunroof (with an opening front portion) that allows plentiful light inside, and a ten-speaker standard stereo that can be upgraded to either a Harmon Kardon setup with 16 speakers or a 20-speaker Bowers & Wilkins surround sound system. 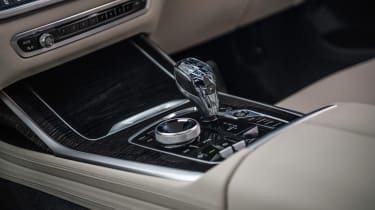 There are myriad extras available for the X7, including some that have never been seen in a BMW before, like the Sky Lounge Panoramic roof that uses LED lighting to illuminate thousands of graphics within the glass. The standard seven-seat layout can be changed to a six-seat luxury setup, replacing the middle bench with two individual seats, and the headlights can be upgraded to BMW Laserlights, which boast a 600-metre range.