More efficient than many combustion rivals, but a plug-in hybrid is sorely needed

Over the years, BMW has developed an impressive knack for keeping fuel consumption and emissions down, even for its larger models. Its engines are some of the best on the road, using advanced turbocharging to use as little fuel as possible.

There are four engines available for the X7: two diesels and two petrols. All are turbocharged and have six cylinders apart from the range-topping V8 petrol engine. All come with four-wheel drive and an eight-speed automatic gearbox. A manual gearbox won’t be offered given the X7's luxury status and autonomous driving features.

The first diesel in the range is the 3.0-litre mild-hybrid found in the xDrive40d and is familiar from the BMW X5 and BMW 5 Series. In the X7, it can return up to 36.2mpg, while emitting over 200g/km of CO2. Like every X7, this places the car into the top BiK banding for company-car tax. 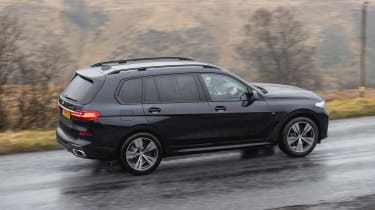 Stepping up to the M50d reduces efficiency slightly to 235g/km and 31.4mpg, but that doesn't seem too bad given the power hike. The corresponding jump in price of around £15,000 will be a bigger cost consideration though, and it's also worth considering the eye-watering depreciation range-topping SUVs typically incur.

Costing only slightly more than the xDrive40d, the petrol xDrive40i can return up to 25.7mpg and emits 250g/km of CO2, making it cheaper to run than the Range Rover’s 5.0-litre supercharged V8.

As the most potent X7 in the range, the M50i is also the most costly to run, with its 4.4-litre V8 petrol engine capable of up to 22.1mpg under WLTP economy testing. That’s a figure that falls into the mid-teens every time you accelerate with any enthusiasm. The CO2 emissions are equally high, standing at 290g/km. As you might expect, the M50i is firmly in the top BiK band as a result.

Where the BMW X7 range currently falls down is its lack of an electrified version. While one hasn’t been confirmed yet, a plug-in hybrid could arrive in due course to take on the Range Rover P400e, which has a 2.0-litre petrol, electric motors and a battery pack, for a 31-mile EV range.

All versions of the BMW X7 will be expensive to insure, with its price and specification earning a group 50 ranking. By comparison, the entry-level Range Rover sits in group 45 out of 50.

The BMW warranty lasts for the same three years as most rivals, however, BMW is slightly more generous because mileage isn't capped.

To save yourself from large bills when the BMW X7 requires maintenance, the brand offers fixed-price servicing plans that can spread the cost over monthly payments.