"The BMW X7 is a huge SUV that feels like a high-riding limousine, showcasing the manufacturer's latest technology"

The BMW X7 is the German manufacturer's first Range Rover rival, sitting at the top of its SUV range. It offers the comfort of a 7 Series saloon with the added ability of a high-riding off-roader in a taller and more fashionable package.

It's the largest and most luxurious SUV produced by the firm in a range that now spans from the small BMW X1, all the way through to a large SUV coupe in the shape of the BMW X6. The X7 is noticeably larger than the BMW X5, measuring well over five metres in length and two metres wide; it is, in fact, bigger than most other cars on the road.

Despite being entirely new, the styling of the X7 is instantly recognisable as a BMW SUV, albeit one with far larger proportions. The oversized BMW kidney grilles dominate the front of the car, growing dramatically compared with smaller BMW models as a symbol of the car’s luxury status. It’s a design that has proved somewhat controversial among fans of the brand. It's certainly imposing, and there's plenty of chrome trim dotted all around the X7 to affirm its high price tag. Elsewhere the biggest BMW is fairly conservative, with upright windows, sharp lines and a huge, flat roof flanked by practical roof bars. 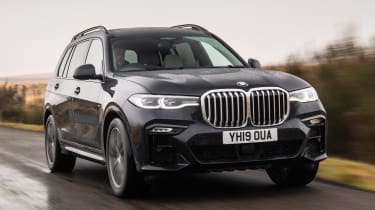 Its boxy shape results in acres of interior space, and the X7 becomes the first fully fledged seven-seater SUV in BMW's stable, with three rows of seats fitted as standard. If you don't need all of them, an upgrade replaces the middle bench with two luxurious individual seats for added comfort. Everything's electrically powered, from folding the seats down to opening both sections of the split tailgate, while air suspension allows you to drop the ride height by 40mm for easier loading. Even behind all seven seats, there's as much boot space as a supermini, while 2,120 litres opens up with the rear seats folded down.

Power is taken care of by two diesels and two petrol engines. All feature turbocharging, with a trio of six cylinder units and a single V8 engine reserved for the flagship M50i model. All X7s have four-wheel drive and an eight-speed automatic gearbox. The entry-level xDrive40d has 261bhp and manages around 36mpg (partly thanks to mild-hybrid technology), while the xDrive40i petrol has 335bhp, returns up to 25mpg and exactly matches the diesel’s 6.1-second 0-62mph time.

The range-topping X7 M50d diesel is tuned to produce 395bhp and does 0-62mph in 5.4 seconds, matching the pace of a diesel V8 Range Rover.

The flagship model is the V8-powered M50i, which has 523bhp and does 0-62mph in 4.7 seconds - quite an incredible time given the car's size and weight. However, despite the substantial pace and grip on offer, the car's 2.5-tonne weight and vast size are difficult to disguise. Handling is competent rather than entertaining, with the equivalent V8 petrol Range Rover the more satisfying car to drive.

However, as strong as these engines are, we expect owners after low running costs and business drivers will be hoping a plug-in hybrid appears soon to take on the Range Rover P400e. 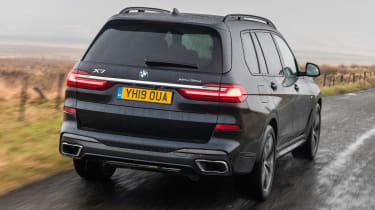 On British roads, the BMW X7 feels smooth and composed thanks to its air suspension setup, and the chassis features all the latest tricks to mask its huge size. Optional rear steering improves agility, while active roll bars can automatically firm up to prevent lean in corners and soften to improve motorway ride comfort. The result is a car that feels like a slightly larger X5, and sportier than a Range Rover.

There aren't many trim levels offered for the X7, with the xDrive40d and 40i coming in standard or M Sport spec, and the M50d and M50i performance models essentially existing in the separate ‘M Model’ trim level. M Sport adds performance accessories inside and out for a sportier look. Costing over £75,000 from the off, lots of kit is standard, including two 12.3-inch displays for the instruments and infotainment system, and driver aids like cruise control. 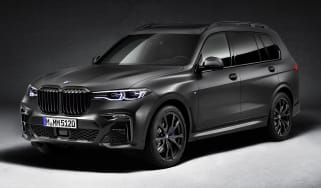 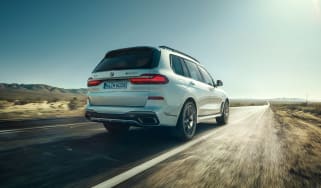