With high driving positions, all the tech and lavish interiors – these luxury 4x4s will make you feel like royalty on and off the road

The original Range Rover is commonly thought of as the first luxury SUV, as it was one of the first 4x4s to combine off-road ability with a plush interior. Before that, 4x4s tended to favour a more utilitarian spec, with basic cabins that were designed to cope with the worst you could throw at them.

Fast-forward to today and the SUV is the most fashionable body style, whether your budget is £20,000 or £200,000. High-riding cars are now much more in favour with luxury buyers than saloons, although the Mercedes S-Class and BMW 7 Series are still popular choices for those wealthy enough to employ a chauffeur. 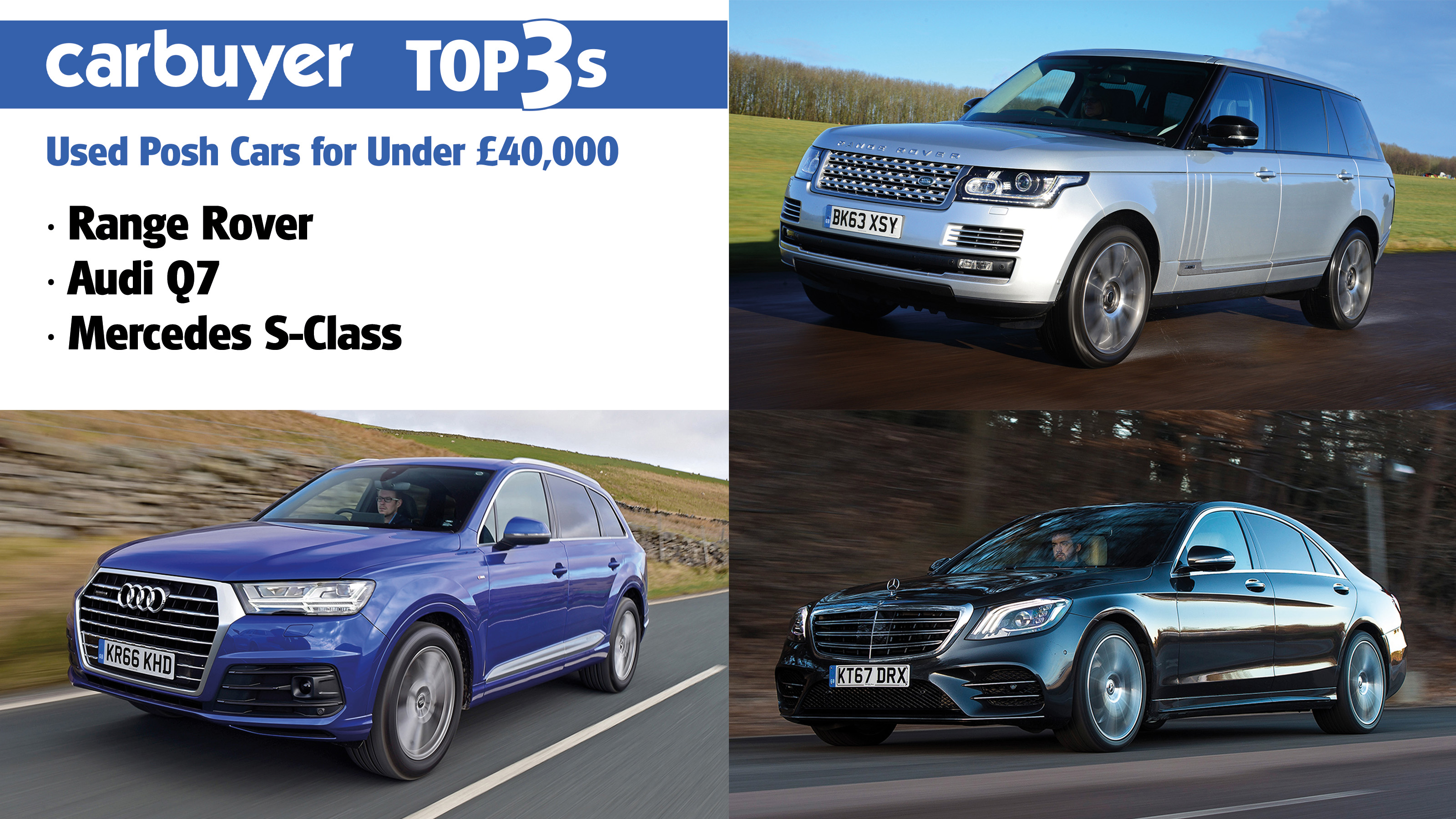 That’s why there are so many luxury SUVs now on sale - depending on the exact definition, we could have filled this list twice. As well as models from established SUV manufacturers, many new ones have joined the fray; a few years ago you’d have never expected SUVs like the Lamborghini Urus, Rolls-Royce Cullinan and Aston Martin DBX. Even Ferrari is due to launch a taller crossover model.

These SUVs offer the very best in cutting-edge automotive technology. They’ve got the newest powertrains, the latest connectivity and state-of-the-art driving assistance. All treat their occupants like royalty and cocoon them from the outside world. Most of these SUVs have room for seven, too, so you can bring all your family or staff along with you.

Some say that the original is always the best, and the Range Rover is perhaps one of the clearest examples of this. Over the last 50 years the iconic model from Land Rover has evolved from an utilitarian workhorse into a classy, yet capable luxury SUV – a segment that it practically invented. This means that Range Rover drivers can traverse the most rugged terrains, all while being cocooned in the car’s sumptuous and tech-filled interior.

According to Range Rover, the latest model adopts a ‘reductive modernist’ design, which is essentially a fancy way of saying its evolution of the previous version, essentially removing or concealing any unnecessary clutter, such as the window seals. Buyers can choose from a ‘Range’ (pun intended) of powertrains, including a plug-in hybrid model with up-to 70 miles of electric range; this almost makes the Range Rover seem economical, ignoring the £100,000 base price, that is.

There are several choices if you’d like your luxury SUV to be electric, but our favourite is the Jaguar I-Pace. At first glance, the I-Pace’s design is distinctly ‘Jaguar’, however a multitude of swooping lines hint at the fact that this is something totally new and modern. Speaking of modern, the Jag’s interior feels like something out of a jet fighter, with several of the brand’s PIVI Pro touchscreens and a driving position that feels more like the F-Type Coupe than it does a proper SUV. Yet, the I-Pace remains practical, with a 650-litre boot and a handy cargo area under the bonnet.

Jaguar is famous for its sports cars and the I-Pace is one of the best-handling EVs you can currently buy. There is only one specification available: a dual-motor, four-wheel-drive setup that produces 396bhp. In a straight line, the I-Pace can do 0-62mph in just 4.8 seconds, while its sharp steering and minimal body roll make it great fun to drive.

Often overshadowed by the flashy yet impractical G-Wagon, the GLS is the Mercedes SUV for those who want more space but a similarly imposing exterior. Billed as the ‘S-Class of SUVs’, the GLS takes several features from its limousine sibling. Everywhere you look it is adorned in the highest-quality materials, while the centre of the dashboard is dominated by Merc’s slick dual-screen MBUX infotainment system. Of course, if this isn’t quite luxurious enough, Mercedes also offers a Maybach model with even more opulence.

If you can’t quite stretch to the £170,000 GLS Maybach 600, there is a choice of two engines: a 3.0-litre six-cylinder diesel in the GLS 400d and a muscular 4.0-litre twin-turbo V8 in the Mercedes-AMG GLS 63 model. Most people will opt for the former, with its 326bhp offering plenty of poke to shift the GLS’s huge bulk. Unfortunately, there is no plug-in hybrid version available, which means you’ll be spending plenty of time (and money) at the pumps.

It may not be the most visually striking SUV to ever grace the private school car park, but the Q7 offers an undeniably high levels of quality and practicality. Just like many SUVs of this size, the Q7 comes as standard with seven seats. However, even with seven seats in place there is similar boot space to that of a MINI hatchback, while folding the third row down reveals a cavernous 865 litres. If style is more important to you than space, the Audi Q8 trades the third row of seats and a bit of boot volume for a sleeker, coupe-style sloping roofline.

Despite being such a large car, the Audi Q7 can be relatively affordable to run. The plug-in hybrid powertrain option provides up to 34 miles of pure-electric range and fuel economy figures that approach 100mpg, providing you keep the battery charged up. There are also traditional petrol and diesel engines available with mild-hybrid technology as well as a powerful V8 petrol in the SQ7;. However, none of these will be anywhere near as efficient as the PHEV.

The Land Rover Discovery lives in the shadow of its more expensive Range Rover siblings, but its interior is still impressively luxurious and has all the space you could ever need. With three rows in place, the Discovery offers 228 litres of cargo room, increasing to 698 litres and subsequently 1,137 litres when folding the third and second rows down respectively, turning your luxury SUV into the world’s poshest cargo van.

Unfortunately, as spacious and luxurious as it is, the Discovery feels a tad prehistoric compared to some rivals; nearly all luxury SUVs apart from the Land Rover are available with plug-in hybrid powertrains, for example, which helps keep running costs to a minimum. The British brand has added mild-hybrid assistance to many of this SUVs engines, however this doesn’t come close to the benefits offered by a PHEV and still means bills on the Discovery will be almost as big as it is.

Genesis is a relatively new brand to the UK market, having only sold in the US and Korea until recently. The manufacturer acts as Hyundai’s luxury brand, similar to how Lexus functions for Toyota. Don’t allow yourself to be a victim of badge snobbery, however, as the Genesis GV80 is one of the poshest-feeling SUVs on sale and boasts an interior to rival that of even the Bentley Bentayga.

While the majority of SUVs try to focus on sportiness as well as comfort, most end up becoming a ‘jack-of-all-trades, master of none’. On the other hand, the GV80 focuses solely on comfort, with its supple suspension soaking up any disturbances caused by our bumpy British roads. Company car buyers beware, however, as there is no plug-in hybrid option for the GV80 yet, leaving the GV80 in the highest Benefit in-Kind tax band.

BMW has received criticism for its designs recently, and the brand’s first ground-up electric car is certainly its most controversial. With an oversized kidney grille and unusual proportions, this is certainly not the prettiest car to come from the Munich-based brand. Thankfully, the iX’s interior strikes a perfect balance between elegance and avant-garde design, with a huge ‘floating’ infotainment system setup, plus luxurious crystal buttons and controls.

Despite being a new-fangled electric car, the iX drives just as well as any combustion-engined BMW; its low centre of gravity provided by the battery packs means that this SUV feels a lot more nimble than its two-and-a-half tonne weight may suggest. Entry-level cars have a sufficient range of 257 miles, while upgrading to the larger 105.2kWh battery pack grants a Tesla Model X-beating 380 miles between charges.

An attractive alternative to the onslaught of German luxury SUVs, the Volvo XC90 is the Swedish brand’s flagship model and is perhaps one of the smartest-looking SUVs on the market. A particular design highlight are the ‘Thor’s hammer’ daytime running lights, which pay homage to the brand’s Scandinavian heritage. Things are equally as Scandi inside too, with a minimalist design and a portrait-style touchscreen.

Volvo now offers the XC90 in two versions: a mild-hybrid or a plug-in hybrid. We recommend the latter, dubbed the XC90 Recharge, as this offers up-to 43 miles of electric-only driving range, depending on your trim level and how exuberantly you drive. Unlike other large plug-in hybrids, however, the XC90 Recharge does not sacrifice its third row of seats to house the electric motor, meaning you and six passengers can cruise around in low-emissions bliss.

The X7 may be the largest model in the BMW range, but it still channels the brand’s values of making premium cars that are focused on the driver. Essentially an SUV version of the 7 Series luxury saloon, the X7 is loaded with the latest technology and high-quality trim. Three rows of seats are fitted as standard in the X7, and, like its rivals, the middle three-seat bench can be swapped for two individual seats that make it feel more like a private jet than a bulky SUV.

BMW facelifted the X7 in early 2022, reaffirming the SUV’s already-contentious design. This mid-life update included a revised split headlight design as well as an illuminated kidney grille. On the inside, the X7 now gets the electric iX’s curved, ‘floating’ infotainment system as well as a more minimalist dashboard design. Yet, rather strangely, there is still no plug-in hybrid version available, with the X7’s model range simply receiving minor efficiency enhancements in the form of mild-hybrid assistance.

The Bentley Bentayga has been an imposing presence on our roads for well over half a decade now, and while you’d struggle to call the original version attractive, an update in 2020 gave the SUV a much more elegant appearance. Neat touches such as the car’s crystal-embedded headlamps or push-knob air vents help exude an exclusivity and quality not found in even the most upmarket of rivals. Furthermore, while other cars offer a small options list, each Bentley customer is only limited by their imagination when it comes to customising their Bentayga.

You may expect that a Bentley SUV would be as efficient as a chocolate teapot; however, this doesn’t have to be the case. While the brand does indeed offer the Bentayga with both a gas guzzling V8 and even a W12 engine, shrewder buyers can instead opt for a new plug-in hybrid powertrain. In reality, most Bentayga owners probably aren’t worried about fuel costs, but the hybrid does return MPG figures that, unlike the other models, are in the double digits. The PHEV also boasts an electric-only range of around 25 miles – perfect for prowling the streets of Mayfair.

Looking to go electric? Check out our list of the Top 10 best electric SUVs