“Few cars offer the kind of wafting driving experience the Citroen C5 does. It manages the kind of calm cruising only the best limousines can match.”

Citroen has an enviable track record of building interesting saloon cars providing the relaxed gait that’s a perfect match for French autoroutes. Fortunately, the Citroen C5 is just such a car and is perhaps an even better foil for the scarred and battered UK motorway network. In that respect, it’s more than a match for the likes of the Audi A4 and BMW 3 Series, which can so often bash and crash over bumps in the road. Sound good? Well there is a ‘but’, and it’s the fact that the C5 isn’t in the same league as those cars when it comes to driving excitement. Even models like the Vauxhall Insignia can thrill, despite not costing much more. Neither can the Citroen compete with the reliability of rivals. Where the Citroen C5 claws back some ground is for running costs and offering a luxurious feel on a budget. And few saloon cars at this price cut such a dash in the company car park.

As the Citroen C5 reaches the twilight of its life, its engine range has been rationalised to a pair of 2.0-litre diesels, one producing 148bhp and the other 177bhp. That’s just as well, because they were the pick of the range anyway. The 148bhp version is fitted with a six-speed manual gearbox and Citroen claims it can achieve 67.3mpg. Coupled with CO2 emissions of 111g/km for a £30 annual road-tax bill, and the C5’s running costs are about cheap as it gets for a car of this size. It’s not much worse with the 177bhp version fitted with a manual gearbox. Here, it’ll record 64.2mpg and has CO2 emissions of 114g/km for the same road-tax bill. 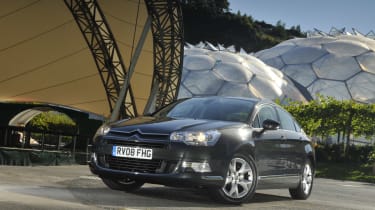 The C5 is brilliant at smoothing out the UK’s roads

The Citroen C5 is more relaxing than racy, so it’ll appeal to as many buyers as it’ll alienate. It’ll only take you a few hundred yards on a test drive to discover that absolute comfort was Citroen’s aim with this car, particularly when it’s fitted with the squidgy Hydractive 3+ suspension system. But even with the standard springs, the C5 wafts over bumps.

The trade-off is that the car never really feels that responsive to your steering inputs and it’s hard to tell what the front wheels are doing when cornering. That leaves you feeling not entirely in control; the experience is a world away from driving a Ford Mondeo or Mazda6.

Both diesel engines are quiet and the way they produce their power from low engine speeds suits a relaxed drive well. Despite that, they’re more than capable of providing the shove needed for overtaking. For the record, the 148bhp engine does 0-62mph in 9.4 seconds while the 177bhp engine takes 8.7 seconds to do the same.

All models excel in the comfort department

Just two trim levels are available in the C5 range today: the oddly named VTR+ Techno Pack and the Exclusive Techno Pack, and neither wants for equipment. That helps to soothe away the miles of course, but it’s features like triple door seals and a sound-deadening windscreen that really matter. There’s plenty of shoulder, leg and headroom available for four adults to get nice and comfortable. The seats are soft, but have just enough support to hold the passenger snugly in place. All of the engines are quiet when driving around town and at motorway speeds, too. Our only real gripe is that the array of buttons on the dashboard, which control the radio and air-conditioning, are really small, fiddly and difficult to use. 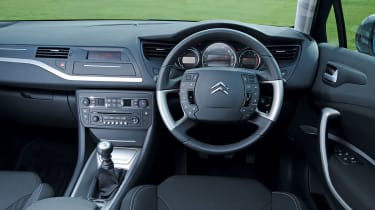 The 439-litre boot is smaller than some rivals’

Unlike hatchbacks such as the Mondeo and Insignia, the Citroen C5 only comes as a saloon and the Citroen C5 Tourer estate. That affects practicality, as the boot lid doesn’t open anywhere near as widely as a hatchback would. It’s worse when you look at the hard numbers, where the C5’s 439 litres of space lags behind the Mondeo’s 541 litres. Inside, the interior offers a decent degree of practicality, however, with 60:40 split-folding rear seats. The door bins and glove compartment are particularly small, as they’re largely taken up with the fuse box – a result of the Citroen’s conversion from left to right-hand drive.

The car has been subjected to numerous recalls

Citroen is certainly improving the reliability of its cars, but the C5 is one of the oldest models it makes – so its build quality is from another era. The initial perception of quality impresses, but it doesn’t take long for faults to occur, according to owners. Plenty have found mechanical and electrical niggles, which is only an inconvenience while the car is covered by its three-year warranty, but a financial burden later. The C5 has a maximum five-star crash safety rating from Euro NCAP, coming with electronic stability control fitted as standard. Citroen’s eTouch emergency assistance system to notify the emergency services in the event of an accident is another neat addition.

If you could possibly need more, then the Exclusive adds extra-comfortable Hydractive 3+ suspension and part-leather power-adjustable front seats.

5
Share on FacebookShare on TwitterShare on LinkedInShare via Email

Show me:
Next Citroen C5 set to challenge premium rivals 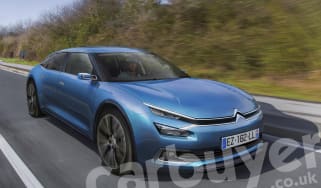 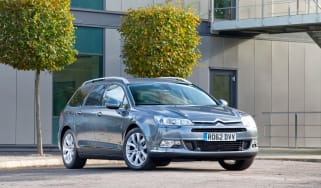 “The Citroen C5 Tourer is undoubtedly one of the most comfortable family estates on the market – but it’s stylish and luxurious too.”
Skip to ContentSkip to Footer