While the DS 4 doesn't look much like the standard Citroen C4, it shares that car's underpinnings – albeit with raised suspension and a different power-steering system. While the taller body might lead you to believe otherwise, the DS 4 has been set up to deliver a sportier drive than the more mainstream C4 and its suspension is much stiffer.

Tackle corners at speed and there's noticeably less body lean in corners, so the car feels more agile. The DS 4's steering system is heavier and quicker, but it lacks feel – just like the electric power steering in the C4. All this means the DS feels a little confused, as it's neither as comfortable to ride in as a crossover (such as the Nissan Qashqai) nor as much fun to drive as a conventional hatchback like the VW Golf. Unless an automatic is essential, we recommend sticking with a manual gearbox. Choosing an automatic gearbox only adds to the car’s cost, while performance and CO2 figures suffer slightly if you specify this option, too. 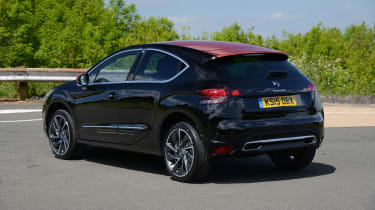 To rein in running costs, it's best to choose a diesel DS 4. The BlueHDi 180 automtic can get the car from 0-62mph in 8.6 seconds and has plenty of power for motorway overtaking. It costs about £1,800 more than the BlueHDi 120 diesel, but has much more useable performance and is likely to be a far easier car to drive on long journeys.

The extra performance it offers over the BlueHDi 180 doesn’t come at the cost of fuel efficiency, though, as the BlueHDi 150 is still capable of returning 64.2mpg. Do note that the diesel engines deliver their performance in one big rush, and unless you've selected the correct gear in the six-speed manual version, the car can be left floundering.

The 1.2-litre PureTech 130 petrol engine offers far more urgency than the old 1.6-litre entry-level engine. More shove is available lower in the rev range, so it feels effortless and eager on the move. Refinement is where this engine excels, with only a muted thrum coming from the engine bay, but outright performance is also decent – 0-62mph is completed in 9.9 seconds.

The turbocharged 1.6-litre THP 165 petrol offers more performance and isn't hampered too much by the standard automatic gearbox.