The DS 4 has a slightly bigger boot than the Volkswagen Golf’s, but in most other areas it falls behind the practicality of more conventional family hatchbacks. The oddly designed rear doors look smart, but opening them reveals a protruding window frame that stretches past the length of the door and restricts its movement in tight spaces.

Access to the back seat is also quite limited thanks to a large window pillar that you have to squeeze past to get in. The annoyances don't stop there – once you're in the back seat, you'll see that DS has decided to give the DS 4 fixed rear windows that don't let in any fresh air.

There's plenty of space in the front of the DS4 and it has a bright and airy feel thanks to its panoramic windscreen, which allows plenty of natural light inside. Find yourself in the back seat, though, and you're in for a shock. There’s less rear legroom than you get in a VW Golf and the car's sloping roofline also restricts headroom in the back. Factor in rear windows that don't open and most adults are going to find the back seats claustrophobic, if not uncomfortable. Getting in there in the first place is also tricky, as the rear doors don't open particularly wide. 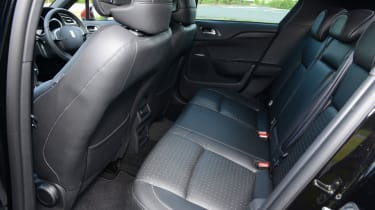 Storage space is good, with big door pockets that can hold a large bottle of water, two cup-holders and plenty of other little cubbyholes dotted around the interior – although the glovebox is tiny. 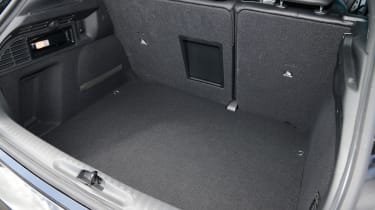 Despite its pretty looks, the DS 4 boasts a boot that's marginally bigger than a VW Golf's (at 385 litres), but slightly smaller than the 408-litre capacity you get in the regular Citroen C4 (the DS 4's sister car). The extra space gained by putting the rear seats down isn't as impressive as you'd think – total load capacity is just 1,021 litres – but all models come with split-folding rear seats as standard at least.