The DS 3 Crossback has a smooth ride and punchy engines 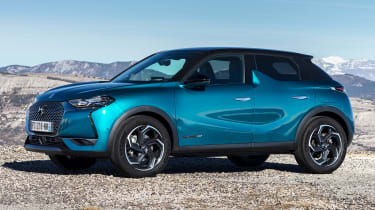 It might be a small SUV, but the biggest compliment you can pay the DS 3 Crossback is that it drives just like a family hatchback. This means it will make light work of most driving situations, from motorways to the urban commute, where it soaks up most bumps and rough road surfaces with ease offering a comfortable ride.

There's a little body lean during cornering that comes that you’d expect with taller suspension and roofline, but the DS 3 Crossback is actually quite eager on a twisty road. It feels grippy and stable, with a nippy feel that's helped by its small steering wheel.

Most DS 3 Crossback owners will choose the petrol engine variant, and even with the choice of an EV, it is our pick of the range. The choice is further complicated by three power levels, however. The entry-level 100bhp PureTech, with a six-speed manual gearbox, is great around town and still has enough power for the occasional dash along faster roads. Then, there are the 129bhp and 153bhp models that are equipped with an eight-speed automatic gearbox for those demanding more performance. 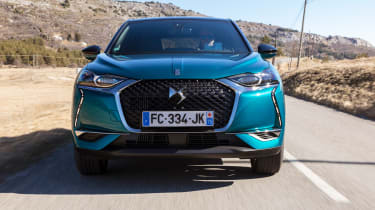 We've driven the PureTech 130 and found it changed gear smoothly, making it suitable for commuters who face daily stop and start traffic. The higher-spec eight speed automatic gearbox models also have paddle shifters for manual control, and the torque convertor automatic responds quite willingly to gear changes. The engine itself is a pleasant thing, burbling audibly thanks to its three-cylinder layout. It settles down to a quiet hum once you reach cruising speed and feels plenty quick enough for daily use. In fact, it leads us to think the 153bhp version will probably be unnecessary for most drivers, especially as it adds a £1,500 premium to the price.

Just one diesel is available, but it should be ideal for anyone who needs an efficient long-range DS 3 Crossback. With 101bhp it has a top speed of 112mph, so should be nicely relaxed at the motorway speed limit. It comes fitted as standard with a six-speed manual gearbox, offering ample power for all daily driving scenarios. Zero-to-62mph takes 11.4 seconds - the longest of any model - and most buyers will be better served by the petrols.

With 134bhp, the electric motor powering the DS 3 Crossback E-Tense offer plenty of pace. In fact, DS claims it can get from 0-30mph in just three seconds, making it extremely quick for town driving, helped by the fact it offers near-instant torque and has no gear changes to worry about. It covers the traditional industry standard 0-62mph benchmark in 8.7 seconds, beating most diesel hatchbacks.

The electric motor and battery add a substantial 300kg to the weight of the DS 3 Crossback, however, and you can really feel the extra bulk through corners and on bumpy tarmac.