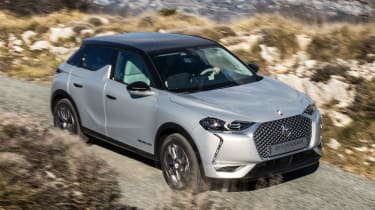 Like a number of new models arriving in 2019, the DS 3 Crossback SUV will be offered with electrified powertrains as well as traditional petrol and diesel engines. Due in showrooms towards the end of the year, we've already been given the keys to a pre-production version of the all-electric DS 3 Crossback E-Tense.

With driving limited to private roads inside a military training camp near Monte Carlo, we can't come to a full verdict, but it was enough to give us a taster of how the E-Tense will compare with standard models and its growing number of rivals.

Hidden beneath its funky bodywork sits a 50kWh lithium-ion battery pack and a 100kW (134bhp) electric motor sending power to the front wheels. As we've come to expect in EVs, acceleration is instantaneous when you press the accelerator, and while the E-Tense is nowhere near as gut-wrenchingly quick as a Tesla, it feels plenty good enough for a small, mainstream SUV. In fact, from behind the wheel it certainly seems quicker than its 8.7-second 0-62mph time suggests because its ability to get from 0-30mph in just 3.3 seconds shows the E-Tense is especially punchy at town speeds. 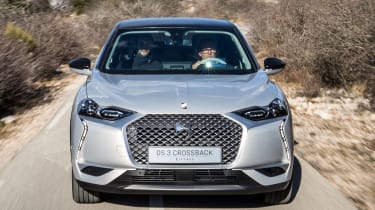 Around the available handful of corners, the DS 3 Crossback E-Tense also exhibited neat handling. By placing the battery pack under the car's floor, DS has kept its centre of gravity low for better balance. The steering felt light and lacking in feel, which should make the E-Tense effortless in car parks and city streets, but can hopefully be improved to increase feedback. At urban driving speeds, the pre-production car was quiet and felt relaxed, with suspension that soaked up small bumps well, despite the 300kg increase in weight versus the petrol model.

While exact driving range hasn't been finalised yet, DS claims the Crossback EV can manage 200 miles (according to the WLTP cycle), putting it ahead of the Nissan LEAF, but some way behind the Hyundai Kona Electric with its larger 64kWh battery pack. Driven gently, Hyundai says you can get around 300 miles of range from its Kona. Using an 11kW wall box, the E-Tense can be charged in five hours, while half-an-hour at a public charging station can top up the batteries to about 80%, making longer trips possible with occasional stops.

Unlike the first slightly outlandish EVs that arrived on the scene, there's little inside the E-Tense to separate it from the petrol or diesel DS 3 Crossback. So, it's nicely designed, but features like a fiddly infotainment system and touch sensitive dashboard buttons can cause frustration. Exact trim details are still up in the air, but sat nav, climate control and 18-inch alloy wheels are all expected to come as standard. 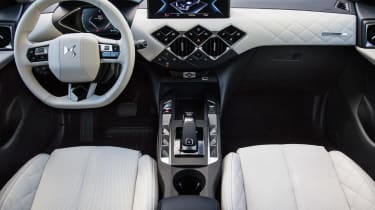 There's also good news for families because its 350-litre boot is exactly the same size as non-electric versions - an advantage of the DS 3 Crossback being built to accommodate EV technology from its inception. Even the standard Crossback isn't the most practical SUV, though, so taller adults will find the back seats fairly cramped.