"The Ferrari California is named after a series of gorgeous convertibles from the fifties and sixties."

Intended to compete with the Porsche 911 Turbo Convertible, Mercedes SL 63 and Aston Martin DB9 Volante, the Ferrari California is designed to attract a wider range of buyers to the famous Italian brand. As a result, it attempts to be three cars in one: a relaxing cabriolet, an efficient long-distance tourer and a thrilling sports car.

Available with a seven-speed dual-clutch automatic transmission and steering wheel-mounted shift paddles, the California is very much a red-blooded sports car, but with a less aggressive nature than Ferrari's other models. It's suitable for everyday use and is as happy cruising along an American boulevard as it is stretching its legs across Europe.

It features a front-mounted version of the Ferrari 4.3-litre V8 enging, producing 483bhp. That's enough to propel the California from 0-62mph in less than four seconds and on to a top speed of 194mph. Make no mistake, although considerable effort has been made to remove many of the typical Ferrari compromises from the California, this is still a Ferrari – and a very accomplished one at that.

CO2 emissions of 250g/km put the California into the highest road tax bracket of £505 a year and a fuel economy of around 26mpg will result in fuel bills about double that of a typical family saloon. Servicing intervals are also shorter, but Ferrari does offer seven years' free servicing on every new car it sells.

Fast or slow, bumpy or smooth – the California drives superbly

A 'manettino' switch on the steering wheel allows drivers to change the way the California responds to driver inputs and road conditions by adjusting the throttle, suspension and traction control settings. The seven-speed dual-clutch gearbox is one of the best of its type, making the California very easy to drive, whether you're queuing in traffic or enjoying a favourite back road.

The most appealing aspect of the Ferrari California, however, is its ability to be a quiet, comfortable long-distance cruiser one minute and a loud, focused performance car the next. The transformation requires only the flick of a switch. Overall, it's a fantastic achievement. The optional Handling Speciale pack provides the California with quicker steering and slightly stiffer suspension for a more precise driving experience.

As comfortable as convertible cars get

For added drama and exhilarating engine noise, removing the roof is effortless, and with the air diffuser in place the cabin is relatively draft-free. Vibrations are noticeable inside at some engine speeds, however. The interior is finished to a very high standard and the supple leather seats are very comfortable, with lots of adjustment.

Despite costing as much as a small house, the Ferrari California’s infotainment system is inferior to those found on more sensibly priced cars. In general operation it’s fiddly and slow to use, while the graphics look old-fashioned. Although it's a touchscreen system, you’re better off using the supplementary physical control wheel to scroll through menus as the on-screen buttons are small, and slow in their operation. Programming the sat nav is also a cumbersome experience, while zooming and panning around maps takes more time and causes more frustration than it should.

It’s not all bad news, though: Ferrari has wisely chosen to give the infotainment screen a matte, rather than gloss finish, and this means it’s easy to read, even in bright sunlight – something you’ll appreciate on days when it’s nice enough to have the roof down. The stereo is similarly impressive, whatever music you play and volume you choose to use it at.

Strictly a two-seater in reality

Although not as practical as the four-seater Ferrari FF, the California is much more user-friendly than previous Ferraris, offering a folding luggage area that connects with the 340-litre boot. The cabin is spacious, airy and well appointed, but the sat-nav system is tricky to use – disappointing in a car costing this much.

Also, if you're thinking of specifying the optional rear seats instead of the luggage shelf, you should be aware that only small children can fit in them. The electric folding roof takes just 14 seconds to lower itself into the boot, but it can only operated while the car stationary and takes up 100 litres of valuable boot space.

Modern Ferraris are beautifully made and very reliable if well looked-after. No major issues have been reported with the California. Multiple airbags are fitted as standard and roll-over hoops will deploy in 190 milliseconds should the car begin to roll over. Stopping distances are very impressive thanks to the standard carbon-ceramic brakes, which provide huge stopping power and don't 'fade' with hard use like regular brakes.

Few cars with six-figure price tags can be described as offering good value for money, but the Ferrari California looks particularly overpriced when you consider a Porsche 911 Turbo Cabriolet costs more than £20,000 less. The California is the cheapest Ferrari available, however, and comes as standard with those staggeringly good carbon-ceramic brakes. 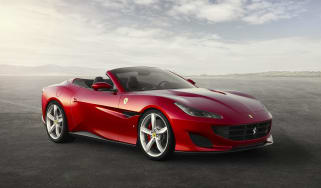 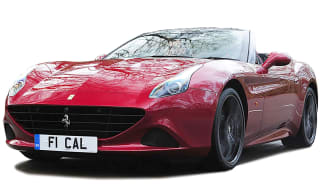 “The Ferrari California T is more at home cruising the streets than tearing up the race track, and it’s all the better for it”
Skip to ContentSkip to Footer