“The Mitsubishi-derived Fiat Fullback can work hard and play hard, but rather lacks polish in some areas compared to rivals”

Models like the Nissan Navara, Volkswagen Amarok, Ford Ranger, Toyota Hilux and Mitsubishi L200 have been attracting growing numbers of buyers, but the beefy Fiat Fullback was only on sale for a few years before Fiat pulled the plug.

In fact, the Fiat was closely related to the Mitsubishi – it shared its mechanical and body structure with the Japanese truck and only really differed in cosmetic detail, trim and standard equipment. For many, the Mitsubishi relationship will come as good news – the familiar L200 is proven and well liked, even though its underlying design is getting rather dated now. Nevertheless, Fiat has made sure the Fullback had plenty of showroom appeal, and a more distinctive Cross model took this one step further, adding a matt black ‘sport bar’ in the load bed, a new grille, large side steps, black alloy wheels with off-road tyres and a distinctive silver front skid plate. 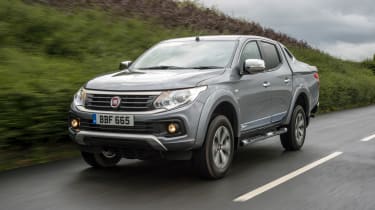 It’s not difficult to see why pickup trucks have become so popular. They were once the domain of builders and workmen, but high-specification models have become popular as a good-value alternative to conventional SUVs. They have significant road presence, muscular looks and can deal with life’s knocks and scrapes. Plus, for those with active lifestyles, the large load bay out back can be a real boon. Whether it’s bikes or jet skis, you name it, with a big payload capacity you can carry what you like.

The Fiat’s rugby position name hints at its ability to cope with the rough-and-tumble of an active life and that’s certainly the impression you get on close inspection. Running boards with steps, a skid-plate below the deep front bumper and big, chunky alloy wheels lend a ‘don’t mess’ air. Inside, substance very much takes priority over style, with a simple layout and robust materials, if not much in the way of futuristic design or classy finishes.

Space isn’t at a premium, though. Unlike the L200, the Fullback was only offered in four-door, double-cab configuration. The rear seats are a little pew-like – you can’t lounge in luxury like in an SUV – but there’s plenty of space for five occupants. You shouldn’t find the 2.4-litre diesel engine lacking for power and all models have selectable four-wheel drive as standard.

As a car developed from commercial origins, the Fullback doesn’t cosset its passengers or provide thrills for the driver – facts that no end of leather and gadgets can come close to disguising. Just as the Mitsubishi L200 was designed first and foremost to do a hard day’s work, luxurious trim can’t turn Fiat’s version into a limousine. It does make it more civilised and easier to live with, but don’t expect it to ride quite as well as a Volkswagen Amarok or Mercedes X-Class. 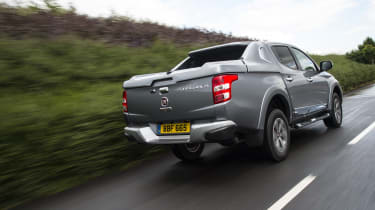 And you’ll probably want to invest in a lockable box in the back – that load area is generous, but open to roving eyes when the car is left alone. Interior storage isn’t a strong point, either, so fitting a hard-top load-bay cover might be wise. This could also make choosing a pick-up an attractive option for business users, with tax breaks afforded in certain circumstances.

The Fullback is subject to the same everyday compromises as other pickups, and for many, a four-wheel-drive SUV will be a better choice. But some lifestyles involve bulky loads that you need something like the Fullback to tackle – and it’s definitely up to the job.

If you’re a business user, the commercial origins of the Fiat Fullback might well work in your favour. With a hard-top fitted (these are sold separately), it meets HMRC’s requirements for company vehicle tax rates, thanks to its carrying capacity. Your Fiat dealer will be able to advise you of ins and outs specific to your circumstances.

If you’re a private buyer, fuel consumption will be of particular importance with a car as big and heavy as the Fullback – and it doesn’t acquit itself too badly in this respect. The 148bhp SX manages 40.9mpg (on the NEDC cycle), the same figure as the 178bhp LX. CO2 emissions are 180 and 186g/km respectively.

You’ll pay at the pumps if you go for the automatic gearbox – it increases fuel consumption to 37.7mpg and emissions to 196g/km. Annual maintenance should be cost-effective – the Fullback has commercial origins and a working vehicle must be affordable to keep in good working order.

The warranty from new had a generous cap of 120,000 miles, although it only lasts for three years. This compares to Mitsubishi’s five-year warranty on the L200, limited to 62,500 miles.

The best news about the way the Fiat Fullback drives is its powerful engines. Both models use a 2.4-litre diesel engine, tuned to produce 148bhp in the SX and 178bhp in the LX. Both are respectably quiet, even when idling, and any diesel clatter fades into the background when travelling at motorway speeds.

Official acceleration figures are on a par with the virtually identical Mitsubishi L200 that manages 0-62mph in 10.4 seconds with 178bhp, while the 148bhp version takes 12.2 seconds. This is competitive in the ‘comfortable pickup’ class – only the powerful 3.0-litre V6-engined Volkswagen Amarok stands out as massively quicker, with its 7.9-second 0-62mph time. The Fullback’s manual gearbox is smooth and pleasant to use, more so than that found in the Nissan Navara, but that car offers a better seven-speed automatic than the Fullback’s old-fashioned five-speed affair. 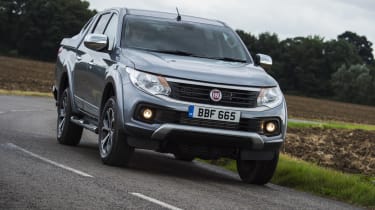 SX models have a three-position switch to choose between high-ratio two-wheel drive and high or low-ratio four-wheel drive. This is a less sophisticated system than LX models, which get the ‘super select’ four-wheel-drive setup from the Mitsubishi Shogun SUV. This gives you a lockable centre differential that can improve traction on really tricky surfaces, as well as the usual two or four-wheel-drive options.

The Fiat’s high ground clearance means it can take on rougher terrain than most SUVs will tolerate and its suspension is designed to deal with fairly chunky obstacles. The turning circle is impressively tight, too. However, this is a long, bulky car and better suited to pulling a boat up a treacherous slipway than taking on a jungle trail.

Its considerable height also gives the game away that the Fullback won’t hug the road like a sports car; high-speed cornering really isn’t its forte. The steering is reasonably well weighted and doesn’t feel too ponderous, but most SUVs will corner in a tidier and more rewarding manner – and ride smoother.

Unlike the more car-like setup of a modern SUV (or the Nissan Navara pickup), the Fullback uses old-fashioned ‘live axle’ rear suspension. This is great at dealing with heavy loads, but not designed with passenger comfort in mind. You’ll be bouncing – not gliding – to your destination.

Despite its aggressive looks and chunky tyres, the Fullback Cross offers much the same experience on the road. In theory, its extra tread should allow its four-wheel drive to find more grip in mud or snow, however.

Standard equipment is generous, but this still isn’t a luxurious car

Both models of Fullback are generously equipped, with air-conditioning, DAB digital radio, cruise control and central locking coming as standard. LX trim adds a 6.1-inch touchscreen infotainment system with sat nav and Bluetooth, as well as heated power-adjustable front seats and leather upholstery. An automatic gearbox was optional on the LX and, to help justify the extra £2,000 cost, it also included an upgrade to a 7.1-inch sat-nav screen. The rugged Fullback Cross is similarly well equipped, with features including a rear-view camera to help avoid reversing over any city cars. 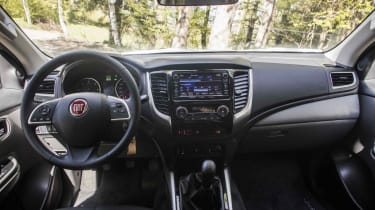 However, there’s still a sense that these features are garnish applied to what is at heart a rather modest vehicle. The materials used inside have been chosen to survive a working life, rather than delight the senses. The design is straightforward and easy to use – although features like the sat nav were clearly added as an afterthought.

Also, the rear seats are rather upright and mounted on the low side. Combined with a bouncy ride, this makes travel rather less luxurious than the LX’s leather seating and climate control suggest. Front-seat occupants have plenty of space, though, and there’s no ignoring the great view out that the car’s raised driving position provides.

All the equipment impresses on paper, but it really just makes the Fullback a convenient car to live with, rather than matching the genuine luxury an SUV can offer.

The Fullback will carry five passengers and a heavy load, but convenience doesn’t impress

On the face of it, a tough and hard-working pickup truck should naturally be a very practical. However, if you’re considering a pickup as an alternative to an SUV, you’ll need to think long and hard about some of the compromises this type of vehicle demands. 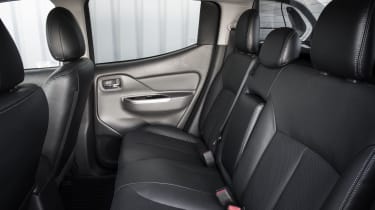 Firstly, you may well miss having a boot with a handy tailgate that you can shelter under when loading shopping, dogs or luggage. Even if you add a hard-top – some of which have a convenient load bed light – you won’t have the nicely trimmed luggage compartment that an SUV provides.

Also, as the load area is completely separate from the passenger compartment, you won’t be able to keep an eye on your cargo. This means a pickup isn’t really ideal for carrying the family dog. Unless you fit a hard top or – at the very least – a lockable box, the load bay has no real security, either. And apart from what you can fit in the small glovebox, narrow door bins and compartment between the front seats, the weekly shop can’t be easily carried in the passenger compartment.

On the other hand, the Fullback’s 1.4 square metre load bay can accommodate a huge amount of cargo, including a Euro pallet if needed. It’s 475mm deep and there are lashing points for holding loads down. The basic rear suspension system allows a maximum payload of 1,045kg – although any hard-top fitted will need to weigh less than 45kg to maintain a one-tonne payload capacity for that all-important company-car tax break.

Fiat publishes a maximum towing weight of 3,100kg – enough to handle a pretty demanding trailer and not far short of the Nissan Navara’s 3,500kg limit.

Reliability should be ensured, but safety falls short of SUV rivals

Reliability should be a strong suit of the Fiat Fullback. It’s essentially a rebadged Mitsubishi L200, which has a longstanding reputation as a hard-working commercial pickup. The engineering is simple and the most common repairs should be straightforward – owners won’t tolerate excessive downtime on a truck that’s needed to earn a living.

Quality is another matter and in the world of pickups that tends to mean fitness-for-purpose rather than tactile appeal. Neither the Fullback nor its Mitsubishi L200 sister have appeared in our annual Driver Power owner satisfaction survey and the car’s relatively tenuous link to Fiat gives us few clues as to how owners might specifically rate it. In our 2019 survey, Fiat finished 15th out of 30 brands, while Mitsubishi came 21st.

When the L200 was launched, it marked some fairly impressive advancements in pickup-truck safety, as these vehicles aren’t subjected to the same crash tests as family cars. This also applies to the Fiat Fullback, which is strongly built to survive a hard life. The list of specific safety features, though, is shorter than you’ll find on an SUV.

LX models of the Fullback add lane-departure warning but there’s nothing as sophisticated as autonomous emergency braking. Nor is there a hill-descent control, which is a surprising omission on a car that touts four-wheel drive as a key feature.