The Ford C-MAX EcoBoost petrol engines are state-of-the-art; ideal for owners who make short urban journeys and those with low to average annual mileage

Despite being a people carrier, the Ford C-MAX drives and handles like a Ford Focus, so it’s more than a match for its rivals from behind the wheel. The suspension is a little firm, but this helps to control body lean in corners, while the steering is precise and responsive. All models are fitted with a torque vectoring system as standard. This sends power to individual front wheels in order to give you the most grip possible at any given moment.

The EcoBoost-powered cars are fun to drive, with a rasping engine note and (especially in the more powerful versions) plenty of overtaking oomph. The diesel is smooth and quiet, and even more economical to boot, while having plenty of power in reserve for relaxed motorway cruising.

The EcoBoost petrol engines on offer are ideal for owners who make short urban journeys and those with low to average mileage. All three variants are relatively quiet in the C-MAX, particularly at higher motorway speeds.

The smaller one is a little slow, though, as the 98bhp 1.0-litre takes 12.9 seconds to go from 0-62mph with the 123bhp version doing the same in 11.0 seconds. Both require a heavy foot, which hurts their fuel economy badly. The 148bhp 1.5-litre with the automatic gearbox takes 10.2 seconds to cover 0-62mph but is much thirstier. 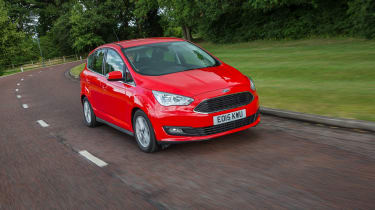 In a workhorse like the C-MAX, where outright performance isn’t a priority, the diesel engine is well worth considering for its mix of driveability and economy. The 118bhp 1.5-litre, goes from 0-62mph in a respectable 9.9 seconds while returning around 48.7mpg, according to Ford.

However, if you pair the diesel engine with the six-speed PowerShift automatic its performance drops off significantly with a 12.4-second 0-62mph time. The automatic model is £1,300-£1,500 more expensive than the manual, too. You do need to consider the purchase price and balance this against your annual mileage to determine whether a petrol or diesel model best suits your needs.