The Ford EcoSport is disappointing to drive

Driver enjoyment is a quality we’ve come to expect from Fords, but the EcoSport is a disappointment. Precise steering is a good start, but you soon realise it feels too light and doesn't communicate what the front wheels are doing. You can actually corner fairly quickly thanks to strong grip from the tyres, but don't expect it to drive like a bigger version of the Fiesta – it feels noticeably taller and leans in corners a lot more as a result.

This is the trade-off made for the EcoSport’s high SUV seating position and raised body – but most rivals feel less compromised. Most have a more comfortable ride, too. The EcoSport's ride is pretty firm and bumps and potholes are very noticeable inside, while noise levels from the tyres and wind as it passes over the windscreen and mirrors are rather high.

The EcoSport will be particularly disappointing if you compare it with the new Puma, as the latter is one of the very best-driving small SUVs. 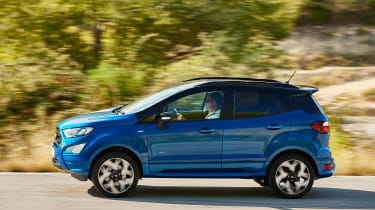 The cheapest diesel in the range is the 99bhp 1.5-litre EcoBlue engine, which gets from 0-62mph in 13.6 seconds. That is undoubtedly slow, but it has more pulling power lower in the rev range than the petrols. This means that it feels perky when you pull away, but the acceleration tails off very quickly. The 123bhp version is only available with four-wheel drive, and is significantly quicker, getting from 0-62mph in 11.3 seconds.

Ford's award-winning 123bhp 1.0-litre EcoBoost engine is the petrol version to go for, as it has a good turn of speed, taking 11 seconds to go from 0-62mph, compared to nearly 12 seconds for the 99bhp model. The 138bhp version trims almost a second from that time, reducing it to 10.2 seconds, but doesn't feel much faster. We suggest sticking with the mid-range model.