Strangely, although Ford consistently sells the most cars of any brand in the UK, it has also fared consistently poorly in our annual customer satisfaction survey – the fact that so many people keep buying its cars doesn’t square completely with customer feedback.

The Ford EcoSport placed 78th out of 100 in our Driver Power owner satisfaction survey. However, Ford's result as a brand has been rather lacklustre for a number of years. In 2020 it finished in 24th place out of 30 manufacturers.

In particular, Ford owners express concern over build quality and fuel consumption, and interior fit and finish aren't up to scratch, either. Better news is the on-board technology carried by Ford cars, and models like the Focus and Fiesta receive rave reports for driver appeal. The same may not be true of the Ford EcoSport, though.

When it comes to reliability, Ford was rated well, with a relatively low 15.6% of owners reporting one or more faults in the first year of ownership. 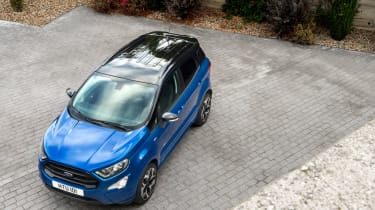 Most cars nowadays achieve five stars in Euro NCAP crash-testing, so it’s always slightly surprising when a new car like the Ford EcoSport only gets four. You should be careful when comparing it directly to older cars that appear to have done better, though, as Euro NCAP’s standards are regularly updated and made more stringent. The EcoSport actually did extremely well for adult occupant protection, scoring 93% (while its 77% child occupant score is also decent), but it was let down by low scores of 58% for pedestrian protection and 55% for safety assistance.