The Ford Focus is routinely one of Britain’s best-selling cars, so Ford has a big responsibility to ensure it’s also one of the safest on the road. To this end, it has fitted more active safety systems to help keep the Focus from having a bump, if at all possible. Reliability will also need to be excellent to help sustain Ford’s rise from the doldrums in our annual Driver Power survey. In 2020, the brand came 24th out of 30 manufacturers, with 15.6% of owners reporting a fault within the first year.

The previous-generation Focus has played an important part in our Driver Power survey rankings. In 2018, the outgoing Focus took 33rd place out of the top 75 models on sale – not bad considering it was that version's final year on sale. In 2019, though, it dropped to 79th place out of 100 cars. Just 5.7% of owners said they’d experienced an issue in our 2018 survey, with the electrics or gearbox the most common culprits. That’s going to be a tall order for the new model to replicate. Hopefully the fact it'll be fitted with a number of the same engines will help it stay trouble-free out of the gate. 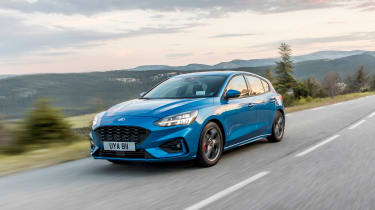 The Focus has received an impressive five-star safety rating from independent body Euro NCAP, despite stringent new standards. Ford has certainly made a big push in active safety technology with the latest Focus, fitting it with three radars, two cameras and 12 ultrasonic sensors - more than any Ford in history.

In this battle to prevent collisions before they even happen, the Focus’ latest tool is ‘Evasive Steering Assist’, which can help you take avoiding action to steer around a slow-moving or stationary vehicle. This sits alongside standard autonomous emergency braking, while the Focus can now detect pedestrians and cyclists near the road, or who may be about to cross. A suite of safety kit labelled 'Co-Pilot 360' includes adaptive cruise control, traffic-sign recognition and a system to help keep the Focus in the middle of its lane on the motorway.

Even the reversing camera has been tweaked to give a ‘near-180 degree’ view of what’s happening behind the car, making it safer to reverse out of parking spaces. Other innovations include the first head-up display to be offered in the Focus and adaptive headlights that automatically adjust to avoid dazzling oncoming drivers.

As well as new technology, Ford says the new underpinnings that form the foundations of the Focus can withstand 40% more load in a front impact.